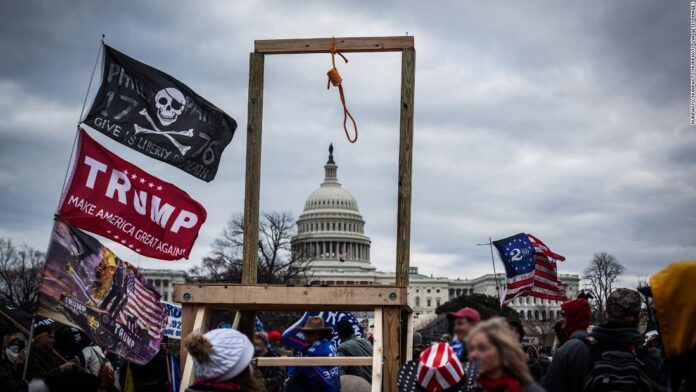 Even now, as new stories come out, there’s a temptation to think about how those “scenes” will play in the movie. But the real future for dramatizing the Trump years likely resides in the former President’s preferred medium, TV.
For those who have been paying close attention — and a lot of people were — there does seem to have been a certain inevitability to Trump’s tenure ending as tumultuously as it began. As New York Times reporter Peter Baker says in “American Carnage,” the events that unfolded in January were “mind-boggling … and yet, wholly predictable.”
The well-documented arc of those years — already presented in numerous bestselling books and documentaries and one scripted miniseries, “The Comey Rule” — underscores why the pop-culture aftermath of the Trump years probably won’t resemble the last administration to which the Trump scandals have often been compared, Richard Nixon’s.
Nixon’s resignation in 1974 yielded the blockbuster book, “All the President’s Men,” and a movie adaptation two years later. It also triggered what amounted to a golden age for paranoid conspiracy thrillers in the latter half of the 1970s, movies like “The Parallax View” and “Three Days of the Condor.”
The entertainment world, however, moved at a different pace back then. There wasn’t real-time reporting on the internet or streaming channels to pounce on a story as juicy as this one. Even the TV miniseries was still in its infancy, before “Roots,” in 1977, demonstrated its colossal ratings power.
The end of the Trump years, by contrast, has had to compete in our imaginations with over-the-top portrayals of Washington, from “House of Cards” to “Veep” to the presidential corruption featured in “24” and “Homeland.”
Cultural critics and Hollywood creative types have joked about the Trump administration giving those writers a run for their money, “They’re either taking from our show or doing their own version of it,” “Veep” executive producer David Mandel told Politico.
The HBO series was hardly alone in its cynical view of politics. The movie business, meanwhile, has significantly changed in terms of the kind of films that reliably attract audiences and has been damaged to a still-unknown degree by the fallout from the coronavirus.
The 1970s movies mentioned above, along with similar titles like “Marathon Man” and “Capricorn One,” were hits in their day but would be hard-pressed to compete with the blockbuster-driven world of superhero sequels, “Star Wars” and the “Fast and Furious” franchise.
Inevitably, the Trump years will still be dissected and dramatized. The first exposure for most of those projects, though, will likely be in living rooms, catering to smaller audiences.
Writing in Esquire, Chris Nashawaty noted that films in the 1970s reflected the anxiety of the times, when “messy truths weren’t dismissed as bitter medicine and box-office poison.” While TV has filled “that vacuum” for such fare, he lamented that the movie business no longer possesses much appetite for it.
In “American Carnage,” the narration describes the Trump presidency and its violent end as “a crisis in plain sight for his party, his country, democracy.” Those elements certainly provide the stuff of great drama, with various books already painting vivid portraits of what transpired behind the scenes.
Yet while stories of the Trump years will be told and retold, as opposed to the post-Watergate movies, look for them on HBO or streaming or expanded into four-part docuseries and multi-episode limited series. Indeed, there are already plans for one of the latter about the UK response to coronavirus, with Kenneth Branagh cast as Prime Minister Boris Johnson.
That approach might deprive future generations of the memorable theatrical movies that Watergate helped inspire. But in terms of how and where we get our entertainment now, it’s very much a sign of the times.
“Frontline: Trump’s American Carnage” premieres January 26 at 10 p.m. ET on PBS.