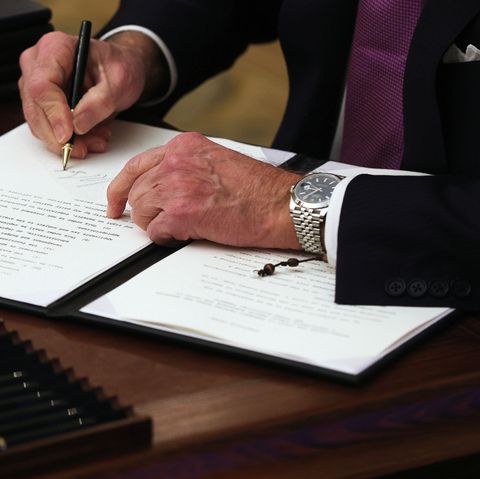 Yesterday, I wrote a story about a watch. This, in and of itself, isn’t exactly unusual. We love watches at Esquire, and we love to write about them. This watch, though, was unusual, in that it belongs to the president of the United States and became a focal point of a good deal of online outrage.

There was, of course, the chorus of folks who got upset that Joe Biden was wearing a relatively expensive watch instead of the more accessibly priced options favored by recent commanders in chief (with the exception of Trump, who wore a number of watches considered pricey even by those accustomed to rarified air of the watch world). To them, I say: Let the president enjoy his Rolex in peace. It looks great on him.

Then there were the people mad that anyone was even discussing the watch at all, viewing it as a distraction from more serious matters. Since talking about style and its broader significance is what we do here, I’ll just say that while there are indeed a lot of serious things to talk about right now, writing off matters of style as inherently frivolous ain’t it either, chief.

Finally, there was a contingent of individuals who were under the impression that the watch had previously belonged to Biden’s late son Beau, who died tragically of brain cancer in 2015. That a great deal of the reporting on Biden’s watch—Esquire’s included—did not mention this seemed an affront to these individuals. That’s understandable, considering the way watches become heirlooms and the emotional power those sorts of heirlooms can hold, especially at momentous events like one’s inauguration as president of the United States.

But despite the similarities between Biden’s Datejust and the watch worn by Beau in photos that surfaced this week, a White House official has confirmed to Mediaite that the timepiece worn at the president’s swearing-in was actually a Christmas gift from the first lady, Dr. Jill Biden. “This official did not know if Beau’s ownership of a similar watch was a factor in the selection of the gift,” according to the site. So, that seals it. Regardless of its provenance, though, it’s a great watch—and one befitting the office of the man wearing it.