Home Sport Garcia on Pacquiao: ‘A changing of the guard’ 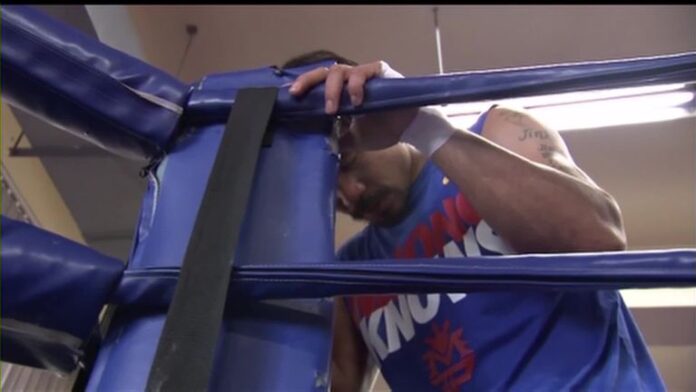 Ryan Garcia’s father on facing Manny Pacquiao: “He’s 20 years younger than Paquiao and we feel that’s to our advantage and that’s one of the reasons why I feel it’s a changing of the guard fight – it’s our time”

Manny Pacquiao’s world title will not be at stake and his fight with Ryan Garcia may be under ‘exhibition’ rules, Henry Garcia has said.

The father of ‘King Ry’ has claimed “it’s going to be a real fight” as details continue to emerge about this unlikely in-ring meeting.

Garcia, the starlet of US boxing, claimed a fight with Pacquiao, who is 20 years older than him, was going to happen in a social media post.

Garcia’s father has now said: “Everybody has agreed, all there is left are the details. But both parties have already agreed; promoters have agreed, sanctioning bodies have agreed, so we’re very close to sealing the deal.

“We’re going to know this week if everything goes through, we’re negotiating today, they are already in discussion.

“I believe Ryan is ready for Manny Pacquiao because when Ryan puts his mind to something he’s not going to back down, he’s got all of the confidence in the world. When you have that confidence and motivation and drive, you can focus on what’s in front of you and you’re most likely going to become victorious.

“Ryan likes to take control and we understood that when (Keith) Thurman put pressure on Manny, he had a hard time fighting backwards – when you reach a certain age you’re no longer as strong as a 20-year-old, we stand a very good chance.

“He’s 20 years younger than Pacquiao and we feel that’s to our advantage and that’s one of the reasons why I feel it’s a changing of the guard fight – it’s our time.”

Unbeaten Garcia enjoyed a breakthrough performance by climbing off the floor to stop Luke Campbell this month.

“We understand how important experience is,” Garcia’s father continued.

“Manny Pacquiao is well rounded. We understand all that, but there’s one thing we understand as well and that’s called the changing of the guard, and we feel it is our time. It’s time for Ryan to step-up, and as long as the weight isn’t too ridiculous, we have a chance to do it.”

Garcia is currently two weight divisions below Pacquiao and his father suggested they meet at a catch-weight: “I’d like that fight at 143 and I’d love that fight to happen in April or May. This one is possibly going to be in Texas, we’re not sure yet.”

Asked if the match-up would be an exhibition, similar to Mike Tyson vs Roy Jones Jr or Floyd Mayweather’s expected meeting with YouTuber Logan Paul, Garcia’s father said: “We don’t know exact details yet but we’re looking at a good 10-rounder but it’s going to be a real fight, that I do know.”

He added that Pacquiao’s world title would not be at stake: “I don’t think so – that’s the direction we’re heading down because no one wants to lose status but they do both want to fight each other and that’s the key.

“Ryan always admired Pacquiao and always wanted to fight a legend before his time was up, he wanted to fight someone of Pacquiao’s calibre, so there’s a chance it could happen.”

Garcia’s father added that it was Pacquiao who suggested the exhibition rules.

This interview is in association with MyBettingSites.co.uk.