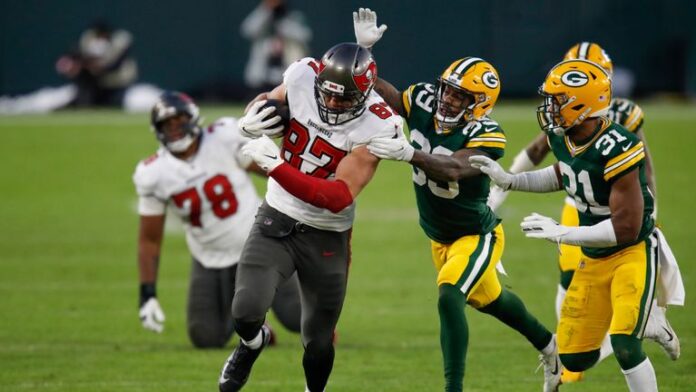 Sky Sports Cricket statistician Benedict Bermange lends his talents to the 2020 NFL season, bringing you his top 10 stats from the Conference Championship games in the playoffs…

Tom Brady‘s three touchdown passes in the Tampa Bay Buccaneers’ victory over the Green Bay Packers took him to 80 in his career in the postseason. Aaron Rodgers of the Packers threw three of his own to move into joint-second on the all-time list.

Most touchdown passes in playoff history

Patrick Mahomes threw three touchdown passes as the Kansas City Chiefs defeated the Buffalo Bills in the AFC Championship game which gave him a total of 17, the most by any quarterback in their first seven postseason games.

Mahomes has passed for at last 250 yards in each of his seven postseason starts, the most by any quarterback to start a postseason career. Andrew Luck started with five such games for the Indianapolis Colts from 2012 to 2014.

Travis Kelce‘s 13 receptions are the most in a league or conference championship game in NFL history. The top two tight ends in postseason history in terms of receiving yards will face each other in the Super Bowl.

Most receiving yards by a tight end in playoff history

Kelce and Tyreek Hill became the first team-mate duo to each have multiple 100-yard receiving games in the same postseason.

Super Bowl LV will be the first to between the quarterbacks who won each of the two most recent Super Bowls. Brady won two years ago with the New England Patriots before Mahomes won last year with the Chiefs. The two starting quarterbacks have an age difference of 18 years, which is the largest between opposing Super Bowl quarterbacks, surpassing the 17 years between Brady and Jared Goff of the Los Angeles Rams two years ago.