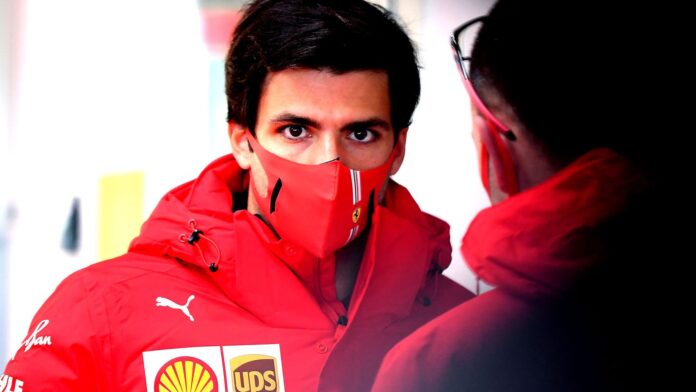 Ferrari’s new 2021 signing getting his first taste of one of their cars at Fiorano on Wednesday; Scuderia’s race-winning 2018 challenger being used for five days of testing with seven drivers; Charles Leclerc returned to action on Tuesday

Ferrari’s 2021 is up and running on track after Charles Leclerc returned to action in their 2018 car on Tuesday, as part of the team’s week-long programme at Fiorano which sees Carlos Sainz make his debut in red on Wednesday.

Sainz has joined Ferrari for 2021 from McLaren as replacement for four-time world champion Sebastian Vettel and gets a first run out for F1’s most legendary team at their test track, albeit in a three-year-old car.

With the Spaniard watching on in his new team colours on Tuesday, Leclerc completed over 100 laps in the SF71-H with Ferrari saying he worked on “practice starts and work aimed at the new championship and pre-season testing”.

Leclerc, who had been in Dubai and contracted coronavirus earlier this month, said: “Getting back in the car today was great, in fact it was brilliant!

So good to be back behind the steering wheel 😍🇮🇹 pic.twitter.com/Y3G6jf0eBw

“Seeing my mechanics again, putting the race suit on, doing my warm-up routine, putting on my helmet and finally jumping in the car and pressing the starter button… the sound of a Ferrari engine is always magic.

“The day was simply perfect and we got through all the work we had planned to do. I really enjoyed myself! Now I hand over to Carlos and I wish him the best of luck for tomorrow.”

With F1’s shortened three-day pre-season testing programme for the new 2021 cars not taking place until the middle of March, Ferrari are using this week at Fioronao to get drivers from across their programmes back up to speed after the winter break.

Academy drivers Robert Shwartzman and Marcus Armstrong plus Giuliano Alesi, the 22-year-old son of former Ferrari driver Jean who is leaving the programme to race in Asia, each drove the SF71-H on Monday.

Sainz takes over on Wednesday and Thursday morning before Mick Schumacher, another Ferrari junior who is racing for Haas in F1 this year, takes over on Thursday afternoon and Friday morning.

Britain’s Callum Ilott rounds off the week on Friday afternoon. The 22-year-old Briton has been promoted to a test driver role at the famous Italian team this year.