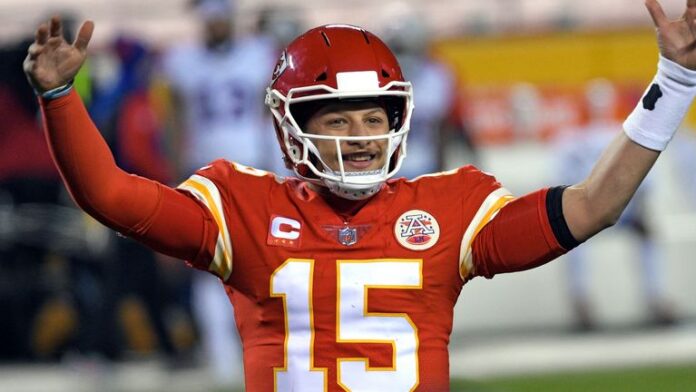 Jay Ajayi on his Super Bowl win with the Philadelphia Eagles in 2018: “We didn’t buy into the mystique of Tom Brady. Even though we respected him as a player and a professional, with all of his Super Bowl wins; I believed my team would get the job done. And we did”

Former Super Bowl-winning running back with the Philadelphia Eagles, Jay Ajayi, has called Kansas City Chiefs quarterback Patrick Mahomes ‘the new GOAT’ after his team made it to back-to-back Super Bowls.

Mahomes’ Chiefs will look to defend their title against 43-year-old Tom Brady and his Tampa Bay Buccaneers in Super Bowl LV on Sunday, February 7 – live on Sky Sports NFL from 10pm.

Brady is hailed as the ‘Greatest Of All Time’ at the quarterback position, with a record six Super Bowl rings to his name and now with a chance to claim a seventh, but Ajayi believes there could be a ‘changing of the guard’ about to happen.

“They are the defending champions for a reason,” Ajayi said of the Chiefs on NFL Overtime (Tuesdays, 9pm, Sky Sports NFL).

“Patrick Mahomes, in my opinion, is the new, incoming MVP, the GOAT – whatever you want to call him.

“It’s like the changing of the guard, that’s what is about to happen.

“It’s Mahomes’ world right now. He finds ways to win. And there are some really good leaders on that Kansas City team – Tyrann Mathieu, Travis Kelce, Chris Jones, the list goes on.

“They have great players, and their coach is Andy Reid, one of the greatest motivators in the game – all the players love him and want to play for him.

“The reason why they’re in this position is not hard to see and I’m excited for the Super Bowl.”

Standing in the way of the Chiefs claiming back-to-back titles, however, is the formidable proposition of Brady, appearing in his 10th Super Bowl and first with his new team in Tampa.

However, Ajayi’s Eagles were responsible for inflicting Brady’s third and most recent Super Bowl loss, in Minneapolis three years ago, and he says it’s important Kansas City’s players don’t ‘buy into the mystique of Brady’.

“In our Super Bowl, all of us had to just play with confidence,” Ajayi said. “We believed in our team.

“We didn’t buy into the mystique of Tom Brady. Even though we respected him as a player and a professional, with all of his Super Bowl wins.

“But, at the end of the day, when you’re in between those white lines on the field, you’re the enemy.

“I believed my team would get the job done. And we did.”

Sky Sports NFL expert Jeff Reinebold said he also expects the Chiefs to beat the Bucs in Super Bowl LV, but that defeat for Brady should not take anything away from his achievements in the game.

“Obviously, there is going to be an awful lot of sentiment around Brady and his legacy,” added Reinebold.

“You take Muhammad Ali, Michael Jordan, Tiger Woods, any great athlete of our era, ain’t nobody who has done anything close to this when you really stack it up.

“I’m not casting shade or taking anything away from the dude, because truly I believe we will never see again what he has done, but the reality of it is, better is better and, in my opinion, the Chiefs are a better football team.

“Think about it; if you had to play a game right now, not based on the past, would you take Mahomes or Brady?”