Home Sport The harsh truth about sharing a ring with Canelo 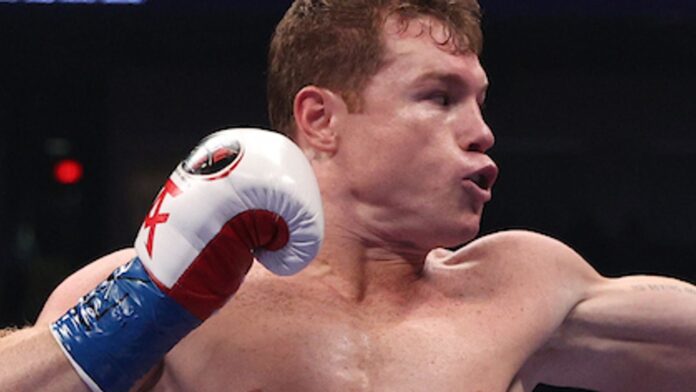 Callum Smith lost a WBA and WBC super-middleweight title fight via unanimous decision against Saul ‘Canelo’ Alvarez last month in Texas and now says: ‘I don’t think anyone beats him’

Saul ‘Canelo’ Alvarez ripped away Callum Smith’s world super-middleweight title and his undefeated record, and established himself as the world’s No 1 fighter. This is Smith’s painful recollection of a chastening experience…

You accepted the fight on relatively late notice – was it a problem?

Ideally I would have wanted full notice but I was in the gym most of the year. If I wasn’t doing anything I would have turned the fight down. I was in decent enough shape, I did the 12 rounds OK. Tactically I would have liked longer to adjust to Canelo but I could have had 12 rounds and there’s no certainty that the result would have been different.

You had a big height advantage over Canelo…

I knew I was bigger than him. When I stood in front of him he didn’t look big physically. I thought: ‘I can’t lose to a man that big’. He is thick-set, he has a good presence, he closes the gap.

Talk us through each stage of the fight…

Like when I boxed George Groves I knew that I couldn’t do anything silly early on, I couldn’t make mistakes and let him capitalise because I knew he’d be ready. It was cagey early on.

I was pretty happy with the first few rounds, there wasn’t much in them. In the second half I hoped to pick it up and come into the fight, which obviously didn’t happen.

He had a good sixth or seventh then he took control. My arm [a tricep injury] was getting sore. He hit me with a good uppercut which had my nose going. It all happened at the same time, he took the fight away from me.

How skilful is Canelo?

He is very clever in terms of the jab. He walks you down. With anybody else, you would jab. But he wants you to jab because he’s a counter-puncher. So you don’t throw as many jabs and while you are waiting, he closes the space down without throwing anything.

Then he jabs and hits you. You think: ‘How did that land?’

He keeps you guessing all the time. You are hesitant.

His best asset was his presence and his defence. He was so hard to hit clean. When I was throwing he was riding them, making me miss. You aren’t landing so you stop fully committing to shots.

He takes away what you are good at.

Did you realise that Canelo was gradually winning the fight?

I knew I was down on the cards, getting marked up, and my left arm slowly got worse and worse. [My trainer Joe Gallagher] asked me if I could catch and counter. But not really. Canelo took away my best asset.

Is it true that Canelo targeted your injured arm then asked: ‘Does that hurt?’

Towards the end, the swelling came up. He looked at it and asked: ‘Sore?’

His next shot, he targeted it!

Sometimes if you get hit on the arm, it is bad accuracy. But he did it a couple of times. He’s an accurate fighter. I knew what he was trying to do.

It was tactical from him.

Is Canelo the best fighter in the world?

I don’t think anyone beats him. He may only lose if he keeps going up in weight but he’s put a stop to that. His defence is just too good.

No. He can obviously punch but his power wasn’t ridiculous. I remember Groves hit me and I thought: ‘I don’t want to take one of those on the chin’.

Would you change anything, in hindsight?

If I got another chance I’d gamble early. Fight fire with fire. I’d take more chances.

How is your tricep injury healing?

Certain movements I still get pain in. It doesn’t need operating, I just need rest.

Is your future at light-heavyweight?

The opportunity to be a two-weight world champion is something I always wanted. I believe that I’m big enough and good enough.

What do you make of the British light-heavyweight scene?

Lyndon Arthur just had a good win against Anthony Yarde. Joshua Buatsi is very good but didn’t look too good in his last fight, but I don’t jump on people’s last performances.

Yarde had a good performance against Sergey Kovalev, who then lost to Canelo and was a bit past it.

WHAT NEXT FOR CALLUM🤔

Could we see Smith v Buatsi at light-heavy?👊 pic.twitter.com/7M9b3N42XP

Callum Johnson, although he lost to Artur Beterbiev, put in a really good performance. On form and wins, you’ve got to put Callum at No 1. Then Buatsi. Then Arthur ahead of Yarde.

Hosea Burton didn’t look too good in his last fight so hasn’t got a case – but I’ve seen him spar Arthur and that’s a fight he would like.

They could all beat each other on any given day. I hope they don’t try and go for a world title without going through the domestic route.