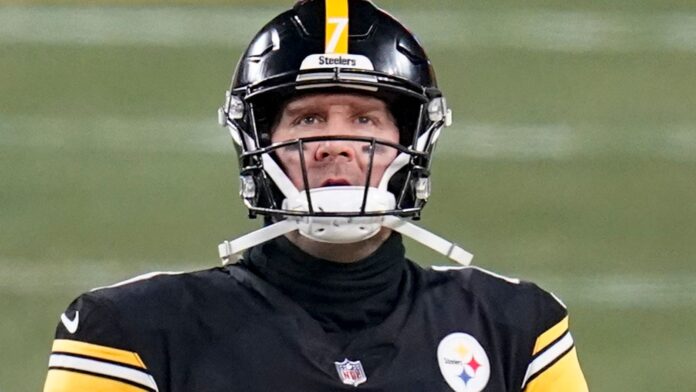 Pittsburgh Steelers quarterback Ben Roethlisberger is willing to renegotiate salary; President Art Rooney II said franchise could not afford to keep the player on agreed money for 2021; Roethlisberger is due to be paid $41.25m next season

Ben Roethlisberger would be willing to adjust his wages after Pittsburgh Steelers president Art Rooney II said the team couldn’t afford to keep the quarterback at his contracted salary-cap hit for 2021 if he did not.

On Thursday, Rooney said Roethlisberger’s 18th season with the Steelers would not come with the contracted $41.25m salary-cap hit. He is due to earn $19m next season, with $4m in salary and $15m coming as a roster bonus on the third day of the 2021 league year.

Roethlisberger, who turns 39 in March, threw for 3,803 yards with 33 touchdowns against 10 interceptions in 15 games this season. The two-time Super Bowl champion and six-time Pro Bowl selection said after Pittsburgh’s wild-card playoff loss to Cleveland on January 10 that he has not made a decision about his future.

“I want to do everything I can and made that very clear to them from the very beginning that it was my idea to basically help the team however I can this year,” Roethlisberger told The Athletic on Thursday. “I don’t care about my pay at all this year.”

Roethlisberger threw for 501 yards with four touchdowns and four interceptions in the 48-37 postseason defeat against the Browns.

“We’ve left that door open,” Rooney said. “We’ve been up front with Ben in letting him know that we couldn’t have him back under the current contract.”

Roethlisberger’s agent Ryan Tollner later reiterated to the Pittsburgh Post-Gazette that the long-time Steelers star would be amenable to making things work for the team.

“Ben knows he has more left, but having key players back, like (Maurkice) Pouncey, will be important,” Tollner told the Gazette. “Ben’s contract won’t hold things up. We told them immediately after the season we will make any necessary adjustment to help their cap situation in 2021.”

Roethlisberger has thrown for 60,348 yards with 396 touchdowns and 201 interceptions in 233 career games since Pittsburgh selected him with the 11th overall pick in the 2004 draft.

Former Washington Football Team quarterback Dwayne Haskins signed a reserve/future contract with the Steelers last week. The transaction was seen as a low-risk move by the Steelers, who also have Mason Rudolph under contract while fellow quarterback Josh Dobbs is set for free agency.

When and where can I watch Super Bowl LV?

The game is available on Sky Sports NFL (407), Sky Sports Main Event (401) and also via Sky One (106). You can also watch on the move via Sky Go – online, on iPhone, iPad or selected Android smartphones – or via NOW TV, with the Sky Sports Day Pass.

Neil Reynolds will be leading the coverage, in the studio from London this year, along with Sky Sports‘ resident coach Jeff Reinebold and Super Bowl XX champ with the Chicago Bears, Shaun Gayle, and they’ll be joined remotely by Minnesota Vikings quarterback, and two-time Pro Bowler, Kirk Cousins throughout the game.

Kick-off is at 11.30pm, but we are on air from 10pm for all the build-up, with plenty of pre-game chat, interviews and features ahead of what promises to be a fascinating spectacle.

Our digital and social platforms will keep you updated too, so bookmark www.skysports.com/NFL and stay across the dedicated NFL section as we bring you a live blog of Super Bowl LIV itself – featuring the best in-play video clips and highlights – plus pundit analysis, player reaction, interviews, podcasts and the very best feature content. There’s also our Twitter feed, @SkySportsNFL, where you won’t miss a thing.