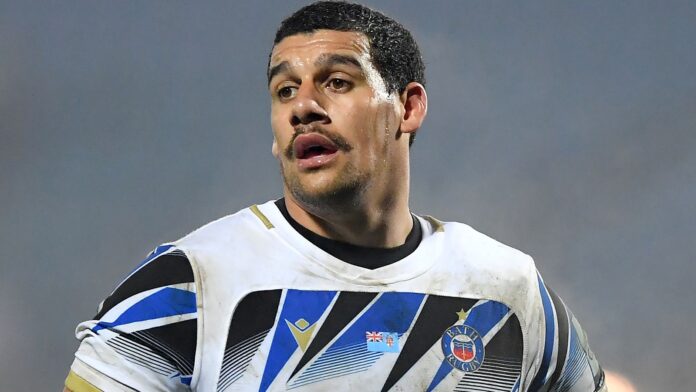 Josh Matavesi insists his camaraderie with Semi Radradra will be discarded when he collides with his Fiji team-mate in Friday’s West Country derby between Bath and Bristol.

Matavesi and Radradra line-up in opposing midfields in the Gallagher Premiership clash at Ashton Gate having operated together on the international stage for the last two years.

Bath’s versatile playmaker views Fijian magician Radradra as the sport’s star attraction – but for reasons beyond the dazzling skills that repeatedly outwits defences.

“I’ve played quite a lot of rugby with Semi for Fiji, including at the World Cup, so I know him well and know it’s a hard job to tackle him,” Matavesi said.

“For me, he’s the best player in the world and that’s because I know what he does off the field.

“People see what he does in the 80 minutes, but for me it’s what he does Monday to Friday – that’s when he earns my respect. He’s dedicated and is a good role model for the younger Fijians as well.

“He’s a great communicator on the pitch. Coming from a Fijian background, we’re normally very quiet people – it might be my Cornish side that makes me loud! – but he’s great at feeding you information.

“He also does the dirty work like hitting rucks. It’s not just offloading, he does carry hard and straight as well. It’s an honour when I play with him, but against Bristol all bets are off.”

Bristol are looking to extend their lead at the summit of the Premiership when they clash against local rivals who have managed only two wins from their six league outings.

The second fixture on Friday night sees Alex Sanderson take charge of his first game as Sale’s new director of rugby when the Sharks visit Mattioli Woods Welford Road, where Leicester are showing signs of resurgence under Steve Borthwick.

Sanderson told Sale’s official website ahead of the game: “One of the most exciting things about coming to Sale for me, was that I knew I wouldn’t have to convince the squad about some of the fundamentals I believe give you the platform for success in this game.

“As an example, physicality, for me, is one of those fundamentals. I played that way, I have coached that way for the last fifteen years and it’s a very difficult mindset to install, but they have it here in bucketloads already.

“You only have to look at the defensive record over the past couple of seasons to show that, but we have to make sure our mentality is spot on too if we want to have a chance of performing at the highest level consistently.”

Meanwhile, Tom Youngs makes his 200th appearance for the Tigers, and Richard Wigglesworth returns from suspension to start at scrum-half, partnering Zack Henry at half-back.

Borthwich said of Youngs’ milestone: “Tom is a homegrown Tigers player, came through the academy system and has played here at Leicester Tigers his whole career.

“He lives and breathes Leicester Tigers and would do anything for the club. Tom is the type of character that every player will follow.”