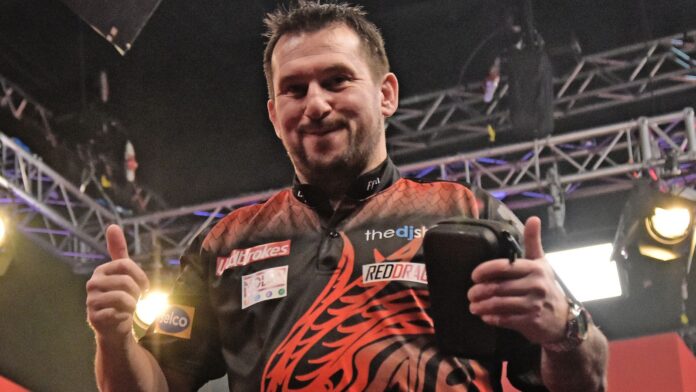 Michael van Gerwen was dumped out of the Masters by Jonny Clayton for a second successive year in Milton Keynes on Saturday.

Five-time Masters champion Van Gerwen saw his 20-match unbeaten run in the tournament ended by Clayton in last year’s event, and the Welshman repeated the feat with a 10-9 victory at the Marshall Arena.

Having suffered a humbling defeat to Dave Chisnall at the world championship and subsequently losing his world No 1 status, Van Gerwen was out to bounce back with a sixth Masters crown but soon found himself 4-1 down in their last 16 clash.

The Dutchman landed trademark checkouts of 158, 150 and 148 as he battled his way to a last-leg decider, but back-to-back 180s from Clayton relieved the pressure on the World Cup winner who closed out victory in 14 darts.

“I got out of the blocks fast and I think that helped, I could see Michael shaking his head early on,” Clayton explained.

“It’s always tough in a last-leg decider against one of the best players ever to have played the game, and those two 180s couldn’t have come at a better time. I was even thinking about a nine-darter!

“Hopefully I can go all the way, that’s what I’m out to try and do. Let’s see what happens tomorrow.”

Clayton will take on James Wade in Sunday’s quarter-finals after the 2014 champion brushed aside Chris Dobey 10-4 in a typically clinical display of finishing.

Adrian Lewis was among the round one winners and he continued his return to form with an impressive 10-8 win over Gary Anderson to reach his first TV quarter-final since July.

Having come through a deciding leg against Michael Smith in round one, 2013 Masters runner-up Lewis averaged 98.56 with a 50 per cent checkout success rate to maintain his positive start to 2021.

“I’m over the moon to win against Gary,” said Lewis. “He’s just been in a world championship final so he’s in good form.

“I feel like I’m in the mix again, for the last three or four years I felt like I was out of it. I’ve always said it only ever takes one tournament to get back to your best.

“I know what I’m capable of and what I’m showing here is a lot more like it, but I still know I can do a lot better.”

Next up for Lewis is a meeting with world champion and world No 1 Gerwyn Price who picked up where he left off at Alexandra Palace with a 104.37 average in a resounding 10-3 defeat of Joe Cullen.

“I wanted to start my reign as world champion off on a positive note and I’m happy to have done that tonight,” said Price.

Reigning champion Peter Wright began his title defence with a 10-8 victory over Simon Whitlock, defying a 105.9 average from his Australian opponent.

Chisnall lays in wait for Wright after the 2016 runner-up came through a last-leg shoot-out to defeat Daryl Gurney 10-9, having surrendered a 6-3 advantage.

Nathan Aspinall also came through a last-leg decider against Mensur Suljovic, recovering from 9-7 down and surviving five match darts to secure a much-needed victory in dramatic fashion.

Aspinall will meet a resurgent Mervyn King after the 2014 runner-up secured a comprehensive 10-5 defeat of Rob Cross, averaging 101.64 to maintain his impressive form.

The Masters concludes on Sunday with the quarter-finals in the afternoon session, followed by the semi-finals and final in the evening.