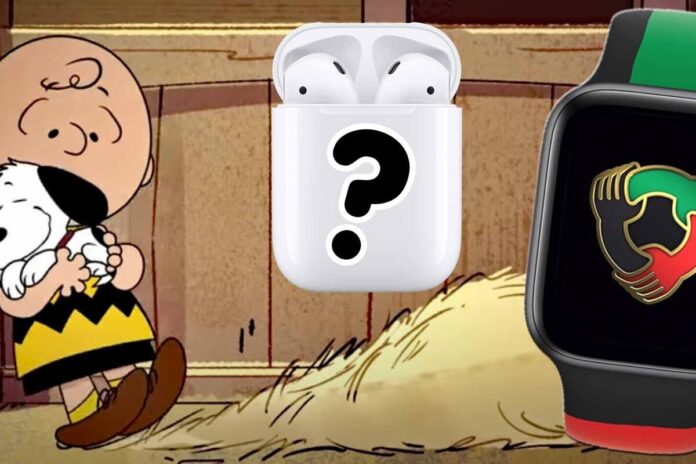 Apple started 2021 the way it finished 2020: with a bang. While we haven’t gotten any hardware releases in 2021 yet, Apple had a fantastic start to the year, announcing a record-breaking quarter with a whopping $111 billion dollars in revenue on the backs of double-digit growth in every product category. It also outlined the ways it would be using its $100 million Racial Equity and Justice Initiative, including the building of the Propel Center, “a “first-of-its-kind global innovation and learning hub,” in Atlanta.

But now that the calendar’s changed to February, here are all of the products, software updates, TV shows, and releases Apple is planning for the month, along with a few things we hope to see before March.

Apple announced last week that a new limited-edition Apple Watch Series 6 will be available throughout the month of February to celebrate Black History Month. The watch is the space gray aluminum model with “Black Unity” inscribed on the back and paired with a special-edition black-red-and-green sport band that “pays homage to the rich tradition and craft of quilting in the Black community and celebrates the colors of the Pan-African flag.” It’s the first time Apple has offered a special-edition Apple Watch that didn’t cost $10,000 and is almost certain to be a collector’s item.

If you don’t want to spend $399 on a new Apple Watch, the Black Unity Sport Band is available separately. Apple will begin selling the band in February, but it will be available throughout 2021. Like the Pride Band released last year, the Black Unity band is hand-assembled from individual pieces of black, red, and green fluoroelastomer so no two bands will be alike. It will sell for $49.

Apple only just released iOS 14.4 at the end of January, but it shouldn’t be long before the first beta of iOS 14.5 arrives. Apple already teased a major new feature that targets ad tracking that should appear in the developer beta when it arrives in the first or second week of February, followed by the public beta shortly afterward.

Big Sur 11.2 is already on its third beta, so it’s likely to be released to the general public in February. There aren’t any new features to speak of, but it should squash any bugs plaguing your new M1 Mac. Of note, the update will also deactivate the exclusion list that allows Apple’s own apps to bypass third-party firewalls and VPN programs.

In late January, Apple updated its iCloud for Windows 10 app with some bug fixes and interface changes, but there’s one feature that wasn’t quite ready for launch: iCloud Passwords. inside the “Passwords” section in the app, there’s a new toggle to access your iCloud keychain, but it’s not yet functional. Rather, it prompts you to download the iCloud Passwords extension for Chrome, which isn’t available yet. But we expect it any day now.

Apple’s newest Peanuts property, The Snoopy Show, lands on February 5 with a series of episodes consisting of three seven-minute cartoons, according to Deadline. The entire season will likely land all at once based on Apple’s prior kids’ releases on Apple TV+.

The second season of M. Night Shyamalan’s thriller Servant debuted on January 15. Episodes 4 to 7 are scheduled to air on Fridays in February.

Apple aired its newest series Losing Alice on January 22 with the first three episodes. New episodes will air on Fridays in February culminating with the season finale on February 26.

Throughout the month of February, Apple will offer curated Apple Maps Guides created in collaboration with EatOkra, a Black-owned business directory app based in Brooklyn, New York. In support cities, customers will be able to find and support Black-owned restaurants in their local communities using the guides.

Apple rarely announces new products in February—you have to go all the way back to February 2013 when the MacBook Pro got a refresh—but after Apple dropped the $549 AirPods max headphones in late December, anything’s possible. There are quite a few products we’re expecting to arrive in the first half of 2021, any of which could appear on Apple’s website one February morning:

Apple’s long-rumored Bluetooth trackers have been tipped to arrive at every Apple event and announcement over the past 18 months. So it’s anyone’s guess as to when or if they’re actually landing.

Apple is reportedly working on a minor iPad Pro refresh that brings the A14 chip and 5G to its flagship tablet, which will likely arrive via press release like last year’s update. We’re expecting it in March, but you never know when Apple might pull out a surprise.

Apple’s ubiquitous true wireless earbuds haven’t seen an update in more than a year, and there are enough rumors that new models are in the works that could arrive at any time. After all, the AirPods Pro landed without any fanfare in late October as did the second-gen AirPods in March 2019. So you never know.