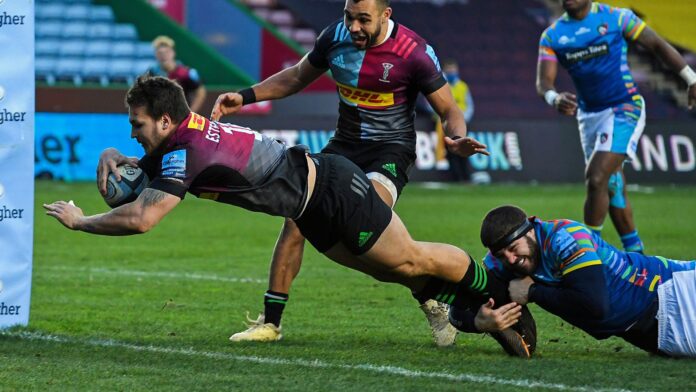 Exeter brushed aside London Irish to close in on Premiership leaders Bristol, while Harlequins saw off Leicester to continue their play-off push.

Harlequins maintained their push for a Gallagher Premiership play-off spot with a try-filled 37-24 win over Leicester at The Stoop.

Tries from Mike Brown, Marcus Smith, Andre Esterhuizen and Louis Lynagh helped Quins back up wins over Wasps and Bath.

Smith, who signed a long-term contract extension this week, scored 20 points and was perfect from the tee.

Leicester last won an away game in the Premiership in April 2019 and were left chasing the game, despite scores from Cyle Brink, Jack van Porrtvliet and George Martin.

Reigning champions Exeter moved to within one point of leaders Bristol at the top of the Gallagher Premiership table with a comfortable 26-3 victory over London Irish at a freezing Sandy Park.

Injury-ravaged Irish battled throughout to frustrate their opponents and it was not until after their replacement hooker Motu Matu’u was dismissed that Chiefs were able to secure their bonus point.

Sam Simmonds scored two of Exeter’s tries to take his tally to 11 for the season. Alex Cuthbert and Dave Ewers scored the others, with Joe Simmonds converting two and Harvey Skinner one.

A penalty from Paddy Jackson was London Irish’s sole response.