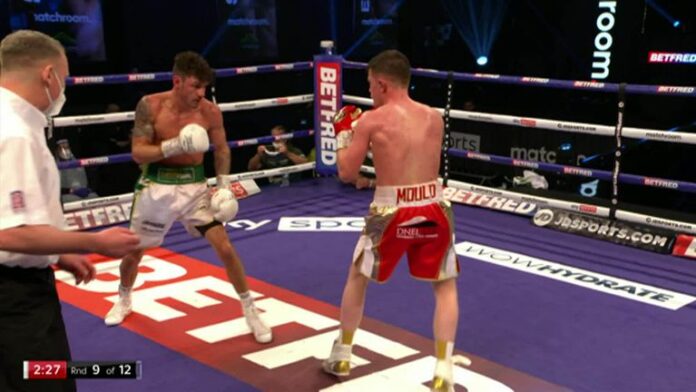 Leigh Wood delivered a dramatic knockout victory over Reece Mould to claim the British featherweight title at The SSE Arena in Wembley.

The Nottingham fighter floored Mould on three occasions, inflicting a final heavy knockdown in the ninth round to secure the vacant Lonsdale belt.

Wood had been troubled by Mould’s early aggression, but he responded ferociously in the fourth round as a barrage of punches dropped the Doncaster man to the canvas.

The superior power in Wood’s punches appeared to give him the edge in exchanges, although Mould maintained a busy work-rate as they entered the later rounds.

But Wood brought a sudden halt to the fight in the ninth, landing a big left hook to floor Mould, and then followed up with a barrage of punches to send his opponent crashing to the canvas.

Earlier in the evening, Dalton Smith displayed his class in a clinical stoppage victory over Ishmael Ellis, who did not come out for the fourth round.

Smith swiftly broke down the resistance of Ellis with a punishing assault, ramming in hurtful right hands during the third round before the bout was waved off.

Hopey Price produced a composed performance as he sealed a shutout 60-54 points victory over Daniel Mendoza after six rounds.

The unbeaten 20-year-old controlled Mendoza from range, occasionally stepping in to deliver thudding body shots, but the Nicaraguan stood firm until the final bell.

In the opening fight, Ibrahim Nadim brought up his third professional victory by defeating Jonny Phillips on points in their six-rounder.