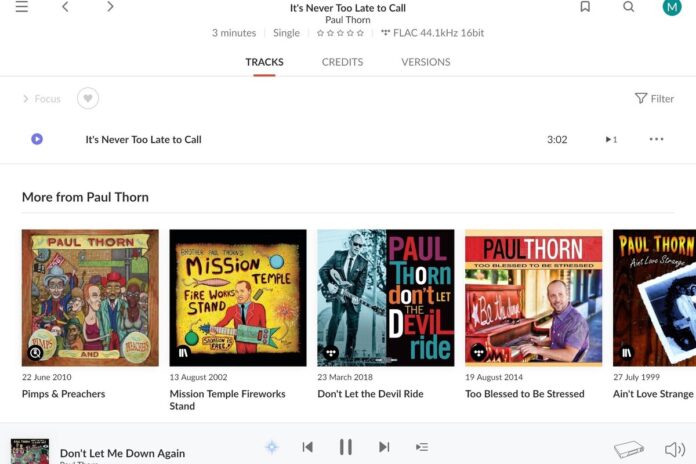 When I reviewed Roon at its launch, back in 2015, I called it “must-have software for hardcore music fans.” I stand by that characterization, although in retrospect, I shouldn’t have restricted its appeal to the hardcore. Anyone who derives deep enjoyment from music will reap tremendous benefits from this one-of-a-kind—albeit incredibly complex—software.

That said, if you don’t consider music essential to life, you’ll probably have difficulty justifying the cost of a Roon license and the relatively steep hardware requirements you’ll need to run it. In addition to the client software that you’ll run on a smartphone, tablet, or personal computer, you’ll need to run server software (the Roon Core) on some other computer on your home network. Developer Roon Labs recommends the server have a least an Intel Core i3 (Ivy Bridge architecture or later) CPU, and it strongly recommends that the Roon database be installed on an SSD.

That rules out a lot of the NAS boxes you might already be using to store your personal music collection, since those tend to run on Intel Celeron, Intel Atom, Marvell ARM cores, or lesser processors. That’s not to say you can’t run the Roon core on a NAS box; it just needs to be a higher-end model with a fast processor. QNAP in particular targets Roon users with some of its higher-end models, as does Synology.

The Roon Core doesn’t necessarily need to run on the same machine where your personal music collection is stored. If you’re using a low-powered NAS box for that purpose, you’ll still be able to use it. At the low end, you could host the Roon Core on an older desktop or laptop computer that’s no longer useful for other purposes (the Roon Core can run on Windows, MacOS, or Linux). Next up in terms of performance would be something like an Intel NUC or a late-model Mac Mini.

There are three reasons for Roon’s stringent hardware requirements. First, Roon constantly analyzes the music you listen to—both your music collection and the music you stream from services such as Qobuz and Tidal—so that it can aid in your discovery of new music. I’ll get deeper into this in the other half of this review. Second, you have the option of applying resource-intensive digital signal processing to your music streams in real time, ranging from parametric EQ to room correction and lots more. Lastly, you can stream music to multiple zones simultaneously—up to six with a Roon Nucleus or its equivalent, and more than six with a Roon Nucleus Plus or its equivalent. (I’ll explain what the Roon Nucleus and Nucleus Plus are in a moment.)

Roon’s multi-room streaming comes with limitations, however. All the clients in a group must have the same processing capabilities, or they must be capable of falling back to a common protocol that might be more limited, such as Apple AirPlay or Google Cast. The upside, of course, is that you can build out a multi-room audio system using a mixture of components from different brands, using high-fidelity hardware in your primary listening room and less-expensive gear in rooms where music plays more of a background role.

At the high end, there are purpose-built servers, either from third-party manufacturers or Roon Labs itself: the Roon Nucleus ($1,459) and the Roon Nucleus Plus ($2,559), for example, are passively cooled, entirely silent, Intel-powered turnkey boxes with optional onboard storage for your music library (2- or 4TB for the Nucleus; 2-, 4, or 8TB for the Nucleus Plus). Both models come with a one-year Roon subscription.

Yes, I said subscription. Roon Labs operates on a software-as-a-service (SaaS) business model, in which you pay either a monthly or annual fee to use the software: $13 per month billed monthly, or $10 per month billed annually ($120 per year). There’s also the option to purchase a lifetime license for $700, but Roon Labs has made been making noises about eliminating this option since late 2019, saying the company doesn’t find the option conducive to its bottom line. That one-time license was just $500 when I first reviewed Roon in 2015, so I wouldn’t dismiss Roon’s musings out of hand. An available 14-day free trial will help you decide if Roon is right for you.

I took this opportunity to re-examine Roon based on the release of Roon 1.8, which is a substantial overhaul of the original version. Roon provided a Nucleus Plus for this review, but you don’t need anything nearly as powerful to run the Roon client app. I used an iPhone 12 and an aging 16GB iPad Mini 4 to stream music from my personal music library (I have roughly 900 albums ripped from CD and encoded in FLAC), along with tracks from the two music-streaming services that integrate with Roon: Tidal and Qobuz.

No matter how large your personal music library might be, you’ll want to supplement it with one or both of those services to take full advantage of the unparalleled music-discovery tools Roon has to offer. I won’t recommend one service over the other in this space, but Qobuz tends to have more albums encoded in high resolution, while Tidal offers many high-res albums in MQA format. None of the other popular streaming services—Amazon Music, Apple Music, Spotify, Deezer, et al—integrate with Roon.

You can use the Roon app on Android, iOS, Windows, and MacOS devices, and you can listen to music on an incredibly diverse universe of playback hardware, including pretty much anything compatible with Apple AirPlay, Google Cast, Sonos, and the Windows and MacOS operating systems. You’ll also encounter a host of high-end audio manufacturers—including Bluesound, Cambridge Audio, Devialet, and Q Acoustics—offering Roon Ready components. I streamed music to a Cambridge Audio CXN v2 network audio streamer connected to a CXA60 amplifier from the same manufacturer. I also streamed music to several Sonos components, including a Sonos Amp.

As I mentioned earlier, you can group devices together and stream to them simultaneously, but Roon will step down to the lowest common denominator in terms of your hardware’s capabilities. When I streamed music from Tidal to the CXN v2, for example, streams would come in at up to 24-bit resolution and at sampling rates as high as 96kHz. The Nucleus Plus would then use the Roon Advanced Audio Transport (RAAT) to send this bit stream over my network to the CXN v2, which would upsample the stream to 24-bit resolution and a 384kHz sampling rate to increase accuracy and eliminate jitter, the timing errors that can lead to audible distortion.

When I grouped the CXN v2 with my Sonos Amp to stream music to more than one room at a time, Roon fell back to the highest-quality settings that both devices support, downsampling (if necessary) to 16-bit resolution and using Apple AirPlay for transport. The Roon app informs you at all times precisely what is happening with your audio stream at every stage of playback. Roon supports every important audio format, ranging from FLAC to DSD.

Now that you understand Roon’s nuts and bolts, let’s discuss the Roon user experience. When combined with a service like Qobuz or Tidal, Roon becomes the ultimate tool for exploring music and discovering new artists, thanks to metadata created in house and licensed from third parties. This explains Roon Labs’ preference for selling ongoing subscriptions over one-time licenses. Buy a one-time license and you provide Roon a big spurt of revenue—once. The company will be on the hook for its licensing fees in perpetuity.

The best Roon experience comes from critical listening sessions with a display in front of you. Using a tablet is more rewarding than using a smartphone; and using a laptop with an even bigger screen is arguably better than using a tablet.

While it would seem logical to start your Roon journey with the Roon app’s home screen, that is the one aspect of the app that I found fault with. Too much screen real estate is wasted on information you either don’t need or don’t care about, starting with your own name. You can, of course, scroll down to find more important information, including new releases, popular local radio stations, and the musical genres you’ve been following the closest. But you must scroll nearly to the bottom to find the Discover block, the tool that long-time Roon users have used as the jump-off point for their musical explorations.

Fortunately, there are so many other ways of using Roon that you’ll quickly forget that the home screen even exists; I know I did. But if you’re curious as to how many albums and tracks are in your own library and how many artists and composers are represented, you’ll find that information prominently displayed. Tapping on any of those stats reveals a relevant list and you can start listening to a selection with a tap of your finger.

A row of album cover thumbnails below this displays more most recent listening activity. Scroll down and you’ll find a block of new releases, organized either by albums or singles. A calendar-based chart below this shows how much time you’ve spent listening to music each day of the week, and a graph below that analyzes the musical genres you’ve spent the most time with. The analysis continues with the artists and albums you’ve listened to most often, followed somewhat incongruously by a list of popular local radio stations and then a list of the artists you’ve played most recently. Finally, you’re presented with more blocks of musical genres, recommended artists, and more. The final two blocks of information display playlists from the music services you subscribe to.

Wherever you are in the app, you’ll always see a block at the bottom of the screen with a small thumbnail album cover for the track you’re currently listening to, along with transport control buttons—play/pause, next track/previous track—bracketed by two icons. Tap the one on the left to display the entire signal path, from source to end point (shown in screenshots earlier in this review). Tap the one on the right to see a scrollable queue. To the right of that you’ll see an icon for the current playback device or group, with a multi-function volume-control icon in the far right corner. Tapping the volume control opens another small window with buttons for turning the playback device off, setting a sleep timer, transferring the stream to another device, and opening yet another window where you can choose various DSP settings.

Whatever your jump-off point—a block on the home screen or a given genre, artist, album, or song—Roon is rife with opportunities to discover more information about the music you enjoy. Tap on the small album cover thumbnail and the song’s lyrics will appear, swipe left and you’ll see a portrait of the artist, another swipe to the left delivers a larger version of the album cover. Swipe again and you’ll be presented with a critical review of the album. Another swipe left presents a bio of the primary artist. Both of those last screens include thumbnails of and links to other artists mentioned in the articles.

Finally, Roon credits everyone who contributed to each track and its recording, including the composer, the lyricist, and the primary artist. Don’t like the order in which information is presented? You can rearrange the presentation and turn off any element you don’t care about.

iPhone 13 rumors: Everything you need to know

These are the products we wish Apple would make

How to remotely control your iPhone’s camera