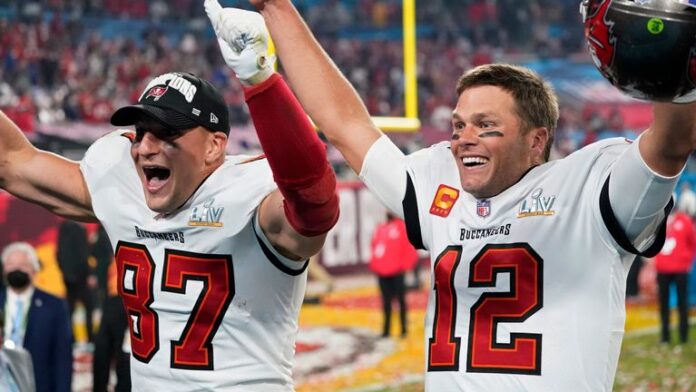 Tom Brady signed a two-year deal with the Tampa Bay Buccaneers in March 2020 after leaving the New England Patriots following 20 years with the organisation.

Tom Brady committed to the 2021 season in the afterglow of his seventh Super Bowl victory this month, and Tampa Bay Buccaneers general manager Jason Licht envisions talking about another contract with his 43-year-old quarterback.

“We thought Tom played incredibly well – along with the entire team – and we would love to have Tom play here as long as he wants to play,” Licht said on Wednesday.

The Buccaneers are strapped for cash entering the new league year and turning Brady’s $25m salary into a bonus, or splitting his contract between base salary and bonus, would bring significant cap relief. The accounting maneuver was commonly utilised by the Patriots.

“We’d like to keep this going,” Licht said on The Rich Eisen Show.

The NFL league year, which is the official start of free agency, begins March 17.

Pass rusher Jason Pierre-Paul could also be a candidate to have his deal restructured. He’s in the final year of his contract and is owed $12.5m in 2021. Pierre-Paul, 32, said he underwent knee surgery and expects to be healthy for the regular season.

A move on Brady’s contract would likely come before March 9, the deadline for the Buccaneers to employ the franchise tag. Likely candidates for the one-year tag include wide receiver Chris Godwin.

Head coach Bruce Arians said Brady is showing no signs of wear and the uninformed observer would never guess his age. Brady repeated this month that he’d like to play multiple seasons, and in the past pointed to 45 as a benchmark he strived to hit.

“It appears he had a really good time this year winning the Super Bowl and likes our organisation,” Licht told The Rich Eisen Show. “Likes our coaches, likes our head coach and ownership and we certainly love him. Usually when you have those two things going for you, it’s a match made in heaven. So we’d like to keep this going.”