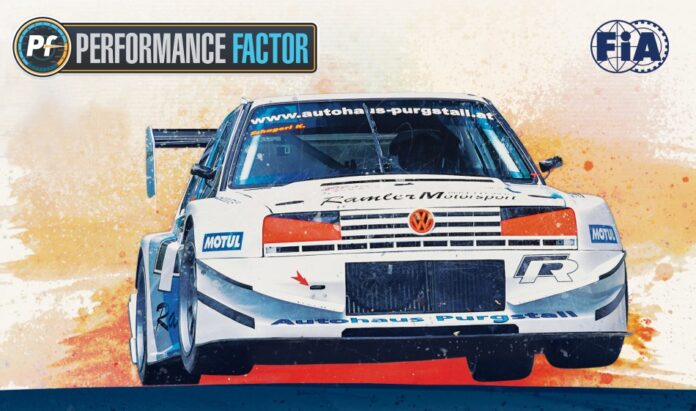 The Performance Factor will be the focus of attention in the 2021 Hill Climb season. An optimised version of the calculator that determines the Pf of each car is now online.

Due to be fully implemented in 2020, Pf 2.0 was subsequently delayed by the impact of the COVID-19 pandemic and the cancellation of the FIA European Hill Climb Championship.

As a reminder, the “Pf” is a new and unprecedented method of classifying cars – initially limited to the so-called “closed” cars in Category 1 of the FIA European Championship, International Cup and Masters Hill Climb races.

The application of this method involves an online calculator (www.fiaperformancefactor.com) which delivers a value – a number of points – reflecting the level of performance of the car. To determine this value, the software bases its calculation on the easily “measurable” characteristics of each car. These characteristics, of which there are 39, mainly concern the weight of the vehicle (driver on board), its dimensions and those of any aerodynamic equipment, and engine and chassis data.

The mathematical formula that generates the value of Pf has been refined in recent months, taking advantage of new studies and also feedback from the four national championships that had already adopted Pf in 2020 (Poland, Spain, Slovakia and the Czech Republic). The range of information to be imported into the software has thus been extended, mainly concerning the engine, with, among other things, the compression ratio, plus the number and diameter of throttle bodies now to be declared.

To enter in Category 1, the principle remains the same as before: on the entry form, each competitor must indicate the Pf value assigned to his car by the software as well as the number of the associated technical data sheet (the “Pf-ID”). The numbers generated by the new version of the system are recognisable by the code “Y2” which they include in the 8-digit sequence of the Pf-ID. Data sheets produced by earlier versions are no longer considered valid.

According to the value of their Pf, the cars will be divided into the five groups of Category 1, as follows.

Test the Pf of your car on the FIA Pf website ! www.fiaperformancefactor.com