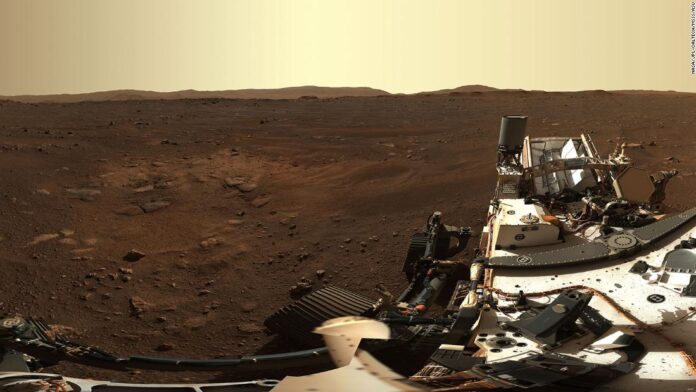 In this case, it’s a steady stream of amazing imagery from another planet.
The rover’s Mastcam-Z instrument, a pair of zoomable color cameras, returned 142 images of its landing site on February 21. The teams at NASA stitched them together to create the instrument’s first 360-degree panorama.
This is the first high-definition look at Jezero Crater, the site of a 3.9 billion-year-old dry lake bed where the rover will search for signs of ancient life over the next two years.
In the image, the crater rim and the cliff face of an ancient river delta can be seen in the distance. It’s not unlike images shared previously by NASA’s Curiosity rover of its exploration site in Gale Crater.
“We’re nestled right in a sweet spot, where you can see different features similar in many ways to features found by Spirit, Opportunity, and Curiosity at their landing sites,” said Jim Bell, principal investigator of the Mastcam-Z instrument at Arizona State University’s School of Earth and Space Exploration, in a statement.
Perseverance also sent back a panorama using its Navcams, or navigation cameras, over the weekend.
Mastcam-Z is a new feature on Perseverance that builds off of lessons learned from the Curiosity rover’s Mastcam instrument. Curiosity’s Mastcam has two cameras with a fixed focal length, while Mastcam-Z has zooming capability.
These two cameras are like high-definition eyes on Perseverance as she shares her view with a team of scientists and engineers at home.
They sit on the rover’s mast, reaching eye level for a person who stands just over 6 and a half feet tall. The cameras are 9.5 inches apart to allow for stereo vision.
The color imagery produced by Mastcam-Z is a lot like the quality you would expect from your own digital HD camera, NASA officials said. These cameras can not only zoom but also can focus to capture video, panoramas and 3D images.
This will allow scientists on the mission’s team to examine objects that are both close and far away from the rover.
In the panorama, details as small as 0.1 to 0.2 inches across can be seen if an object is near the rover, while those between 6.5 to 10 feet across in the distance are also visible.
These capabilities will aid the overall goals of the mission in both understanding the geologic history of the crater and identifying the types of rock that the rover’s other instruments should study. The views afforded by Mastcam-Z will also help scientists determine which rocks they should collect samples from that will eventually be returned to Earth by future missions.
The team working on the Mastcam-Z instrument will share more details about the panorama Thursday, February 25 at 4 p.m. ET on NASA’s website and social media accounts.