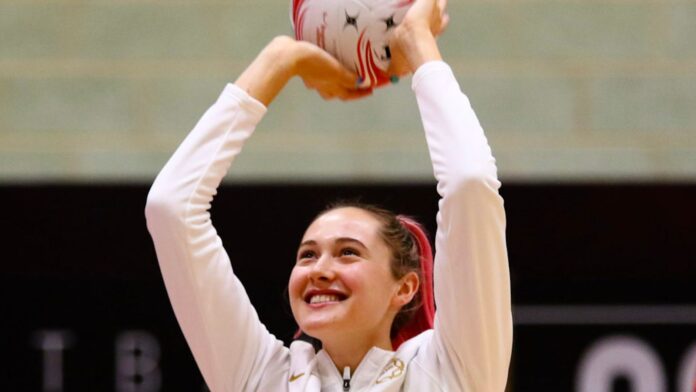 The visa application process started in October last year, and now England’s shooter will be able to join her new club ahead of the start of the ANZ Premiership season; Southern Steel’s opening game is on April 18 against the Tactix

George Fisher’s New Zealand visa application has been approved and she will be able to join ANZ Premiership side Southern Steel.

The application process was initiated in October last year and after securing the approval, Steel’s CEO Lana Winders highlighted the ups and downs of the process.

“There was dancing and singing in the office when the approval came through, and that was just me on my own,” Winders said on Steel’s website.

“Then I called Reinga [Bloxham] and the celebrations continued. There’s just an enormous amount of relief off our shoulders for the team, for all the hard work and for the wonderful people who came to our aid with their letters of support.

“We expected greater rigour to be required by immigration due to the impact of COVID-19 and that was certainly the case,” she added.

Been a long process but what an outcome. I’m finally able to say I’m actually going to join @SteelNetball in New Zealand. I’m so excited and blessed for everyone that has helped make this happen. Thank you & See you all soon. 🙏✈️🏐 https://t.co/4vNoaiij38

“Our first two applications and an appeal were declined as Immigration NZ pushed us to prove this role was a ‘critical’ one to our organisation.

“We secured the support of Malcolm Pacific Immigration to assist us with the application process and from that point we are able to assemble all of the necessary information in a systematic way with the confidence of the expertise they brought.

“George would not be coming if we hadn’t got them involved, or the support of Netball NZ and letters of support we gathered. We can’t wait to see George in the flesh. The wait has been hard for her too, but she has been incredibly patient.”

England’s Vitality Rose announced her move to New Zealand last September and she shared the joy at having signed for the ANZ Premiership side.

I’m living my dream, this is something that I’ve wanted to do since I was a kid and to be able to actually do it, is amazing.

“This move is so, so exciting because going to New Zealand to play netball is something that I’ve always wanted to do,” Fisher said.

“Ever since I was young and I first saw their style of play, it’s always really interested me, and I’ve been attracted towards it. Now, I get the chance to learn so much more about it and test myself there… it’s really exciting.”

Having been out to New Zealand with England’s Vitality Roses, Fisher got a taste of her new life and she’ll now be heading for a two-week quarantine period before linking up with her new team.

“I think it [quarantine] will be harder this time because I will be on my own instead of with my teammates around me,” Fisher said.

“But once you get through the first week, the second week flies by. I’m just going to busy myself with a lot of little things – colouring books, Netflix series, podcasts.”

With Steel having already started their pre-season campaign, they’ve been in regular ZOOM contact with Fisher, and the shooter has been keeping herself in shape while waiting for her visa to be approved.

“It seems like they are having so much fun and are a really chill team. I’m looking forward to getting to know them all. The most important thing is forming those connections, doing the nitty-gritty and training together.

“I just want to get there now, meet the girls and start training so we can form those connections as a team and see how far we can take them.”

The Steel’s 2021 ANZ Premiership campaign starts on April 18 with their opening game against The Good Oil Tactix at the ILT Stadium Southland.