Home World Why Japan took so long to start Covid-19 vaccinations, even with the... 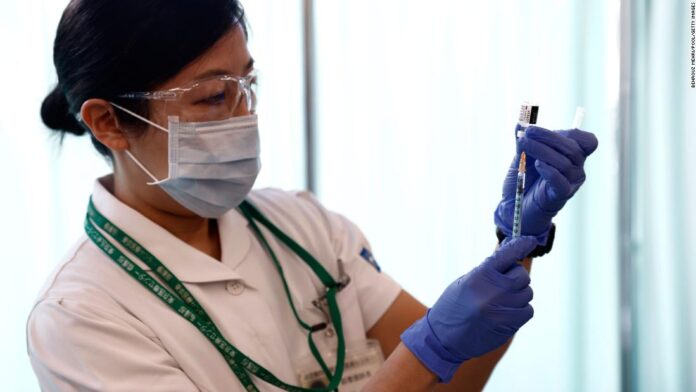 But the country only started inoculating its population of 126 million people with Pfizer-BioNTech shots last week, more than two months after the vaccine rolled out in other major countries, including the United States and United Kingdom.
The US has administered more than 68 million doses since its vaccination program started in December, according to Johns Hopkins University.
In Japan, only about 18,000 doses have been administered, according to the Japanese government.
Japan’s caseload isn’t as high as the US or UK, but in recent months its health system has been overwhelmed by the worst wave of infections since the pandemic started last year, with hundreds of new cases still being reported each day. And Prime Minister Yoshihide Suga is under pressure to reduce infections before Japan welcomes the world for the Summer Olympics.
Like the US, Japan is using the Pfizer-BioNTech vaccine as part of its program. Yet Japanese regulators took two more months to approve its use.
The government says it has been deliberately cautious. After a series of vaccine scandals stretching back 50 years, Japan has one of the lowest rates of vaccine confidence in the world — so winning over a skeptical public is crucial.
However, the decision to move slowly has been criticized by some medical professionals, including Dr. Kenji Shibuya, a professor at King’s College in London, who says Japan’s delayed rollout and its lack of vaccination strategy will ultimately cost lives.

Pfizer-BioNTech conducted extensive Phase 3 clinical trials of their vaccine over several months late last year at about 150 clinical trial sites in the US, Germany, Turkey, South Africa, Brazil and Argentina.
On November 19, the companies announced the vaccine showed 95% efficacy in preventing Covid-19 infections. Two weeks later, the UK became the first Western country to approve the vaccine for emergency use, followed by the US on December 11.
On December 31, the World Health Organization (WHO) also approved the Pfizer-BioNTech vaccine for emergency use.
Japan’s approval came six weeks later, on February 14, after a smaller in-country test of 160 participants showed results consistent with the international trials. By Japanese standards that approval came quickly — normally the process can take anywhere from one to two years. But critics say the delay cost the government valuable time.
“With a sample size of 160 people, it doesn’t give you any scientific evidence on the effectiveness or safety (of a vaccine),” said Shibuya, from King’s College.
Taro Kono, the minister in charge of Japan’s coronavirus vaccine rollout, said the country’s clinical trial was conducted to build public trust in the program.
“I think it is more important for the Japanese government to show the Japanese people that we have done everything possible to prove the efficacy and the safety of the vaccine — to encourage the Japanese people to take the vaccine,” Kono said. “At the end of the day, we might have started slower, but we thought it would be more effective.”

According to a study published in medical journal The Lancet that mapped vaccine confidence in 149 countries between 2015 and 2019, fewer than 30% of people in Japan strongly agreed vaccines were safe, important and effective — compared to 50% in the US.
Japan’s vaccine resistance dates back to the 1970s when two infants died within 24 hours after receiving the combined diphtheria, tetanus, and pertussis (whooping cough) vaccination. The vaccine was temporarily suspended but confidence had already been rattled. For several years, infant vaccination rates fell, leading to a rise in cases of whooping cough.
In the late 1980s, there was another scare with the introduction of a Japanese-produced measles, mumps and rubella (MMR) vaccine. Early versions of the vaccine were linked to aseptic meningitis, or swelling of the membranes around the brain and spinal cord. The problem was traced back to the mumps component of the MMR vaccine, which led to court action and a hefty damages payout.
The National Institute of Health Science discontinued the combined shot in 1993 and replaced it with individual vaccines.
After the MMR scandal, Shibuya says the Japanese government became “risk aware” and its national vaccination program became voluntary.
Dr. Yuho Horikoshi, an expert in infectious diseases, says the lawsuits led to a “vaccination gap,” where no vaccines were approved in Japan for about 15 years.
More recently, in 2013, Japan added the human papillomavirus (HPV) vaccine to the national schedule to protect girls against the sexually transmitted virus, which is known to cause cervical cancer. However, videos of girls allegedly suffering adverse reactions started circulating on YouTube, leading the government to remove it from the national schedule.
The Vaccine Adverse Reactions Review Committee investigated the incidents and found no evidence to suggest a causal relationship between the adverse events and the HPV vaccine. But the reports, and the withdrawal of the vaccine from the Japanese government program, caused a steep fall in the number of girls being vaccinated — from more than 70% in 2010 to now less than 1%.
That low rate could result in almost 11,000 preventable deaths from cervical cancer in Japan over the next 50 years, according to a study in The Lancet.
The WHO recommends giving the vaccine to girls aged between nine and 14 to prevent cervical cancer, which kills 311,000 women worldwide each year. According to a study published in the Journal of Infectious Diseases, rates of cervical cancer in England are falling due to the vaccine. And Australia is on track to eliminate cervical cancer by 2028, according to another recent study, also due to the vaccine.
Professor Shoji Tsuchida, a social psychology expert from Kansai University, says despite Japan’s vaccine resistance there’s no widespread “anti-vaxxer” movement in the country.
“Most people who don’t want to take vaccination are afraid of possible side effects, and not a believer of (what they consider) ‘fake’ science,” Tsuchida said. “Japan’s past side effect cases of vaccination, especially the HPV case, is mainly affecting these people’s minds.”

Effort to reassure a skeptical public

Japan’s resistance to vaccinations presents a problem for the government when it comes to rolling out the coronavirus vaccine.
The first Covid-19 vaccinations in Japan are being given to 3.7 million frontline health workers, with the goal of vaccinating seniors in April.
The Japanese government has asked half of the first round of doctors and nurses to keep an “observation diary,” to monitor any side effects for seven weeks after receiving both doses of the vaccine.
Though the vaccine rollout is now underway, the medical community remains concerned about vaccine resistance. That has led a group of doctors, including New York-based Yuji Yamada, to launch a promotional campaign encouraging people in Japan to get the Covid-19 shots — and they’re using a cartoon dog to do it.
Outfitted in a white doctors’ coat, Corowa-kun is a Shiba Inu-inspired chatbot, tasked with reassuring a skeptical public by answering questions about the vaccine. The name Corowa-kun comes from the Japanese words for “coronavirus” and “vaccine.”
So far, more than 55,000 people have signed up to the app — 70% of them women — its creators said. According to Yamada, Japanese media initially reported on potential side effects of the vaccine. “Those might have been triggers for women who tend to think of vaccine risk more seriously and therefore women have used (the app) more,” he said.
Vaccination minister Kono has thrown his support behind the app, but the government is yet to announce its own public messaging.
In the buildup to the Olympics, Shibuya says the government needs to focus on advocating to the public that the Covid-19 vaccine is safe, important and essential. He says the government must also do more to suppress the virus.
“Suppress, suppress and suppress to eliminate the community transmission — otherwise Japan will repeat the state of emergency again and again, given a very slow vaccine rollout, said Shibuya.
“Their fundamental motivation and incentive is to revamp the economy. If they really want to hold the Olympics, they really need to suppress the transmission, so there’s potentially nearly zero.”