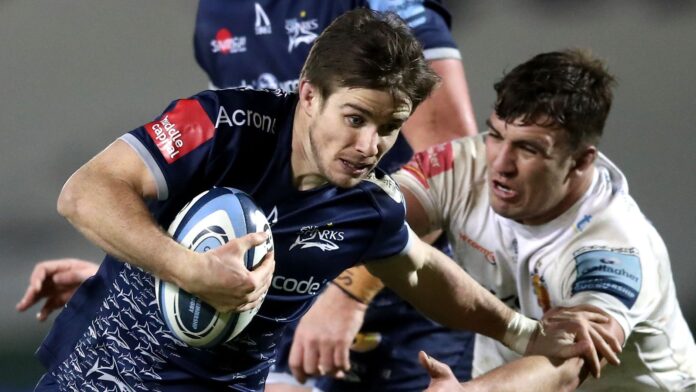 Sale kicked off the latest round of Gallagher Premiership action with a win over Exeter on Friday; Bristol moved six points clear at the top of the table by beating Leicester; Newcastle, London Irish and Gloucester also triumphed

We round-up all of the action from Friday and Saturday’s game in the Gallagher Premiership, including a defeat for champions Exeter Chiefs, Bristol Bears moving further ahead at the top and returns to winning ways for Newcastle Falcons and Gloucester…

Exeter hooker Jack Yeandle became the latest player to be sent off in the Premiership as the champions succumbed to a defeat to Sale at the AJ Bell Stadium on Friday evening.

The Chiefs were 12-8 ahead thanks to tries from Facundo Cordero and Sean Lonsdale when Yeandle was sent off for connecting with the head of Curtis Langdon.

😍 Late drama at the AJ Bell but the Sharks take it at the death despite an awesome final push from the Exeter.

They battled well, however, despite Bevan Rodd responding for Sale and levelling matters at the interval.

Sam Simmonds continued his incredible try-scoring form in the second period and gave Exeter the chance of an unlikely victory.

But the pressure was unrelenting from the Sharks in the latter stages and Langdon’s try, allied to the boot of AJ MacGinty, secured the win.

Bristol extended their advantage at the top of the Premiership to six points with a hard-fought win over spirited Leicester in Saturday’s opening game.

However, the league-leaders struggled to overcome weakened opponents in the encounter at Ashton Gate.

Leicester made numerous changes following last week’s home win over Wasps and their young side frustrated the Bears in the first half-hour.

🗣️ “We showed character to get the victory.”@StevenLuatua says hosts dug in for the W 👇 pic.twitter.com/6gVQDEC8pi

The sin-binning of their centre Matias Maroni proved decisive though as Bristol scored 14 points in his absence.

Will Capon and Piers O’Conor scored Bristol’s tries, with Ioan Lloyd adding two conversions and a penalty, while Joaquin Diaz Bonilla kicked a penalty for Leicester.

Brett Connon held his nerve to kick a last-minute penalty as Newcastle returning to winning ways by beating Harlequins at Kingston Park.

Falcons, whose last two games had been postponed due to Covid-19, claimed a first win since early January thanks to tries from Callum Chick, Logovi’i Mulipola and Adam Radwan and Connon’s composure from the tee late on.

😀 There’s definitely a big smile under that face mask!

Indiscipline cost Harlequins a fifth triumph on the trot, with Simon Kerrod sin-binned for a needless shoulder charge in the dying minutes.

Two tries from Tyrone Green and the kicking of Marcus Smith helped keep Quins in the match, but ultimately they had to settle for just a losing bonus point.

London Irish continued to show they are a growing force in the Premiership by winning 16-10 at Wasps, with Ollie Hassell-Collins’ try rewarding a dominant second-half performance.

The close nature of the scoreline does not really do justice over how on top the Exiles were after the restart at the Ricoh Arena, as they controlled possession and territory, while never giving the hosts a moment to settle.

📸 The winning kick from Brett Connon. Nerves of steel! pic.twitter.com/AKcuJFntqk

They had to survive some belated pressure from Wasps, following a couple of penalties which took play deep into their 22, but Declan Kidney’s side held out.

Three penalties plus a conversion from Paddy Jackson kept the scoreboard ticking over in the visitors’ favour, while a converted try from Tom Willis a penalty from Jacob Umaga account for Wasps’ tally.

Struggling Gloucester launched a stirring second-half comeback to battle past Worcester and secure just their second win of the Premiership season.

Billy Twelvetrees, Matias Alemanno and Tom Seabrook all crossed for the hosts after Nick David’s early try had got Warriors off to a flying start.

Worcester scored a second-half penalty try after Fraser Balmain was sent to the sin-bin to give the visitors a 14-5 lead.

But despite Jordy Reid and Santiago Carreras also being yellow-carded, Gloucester turned the game around and held on for victory.

The result lifts Gloucester up to 15 points in the Premiership table, level on points with Worcester after clinching their first win since November 28.