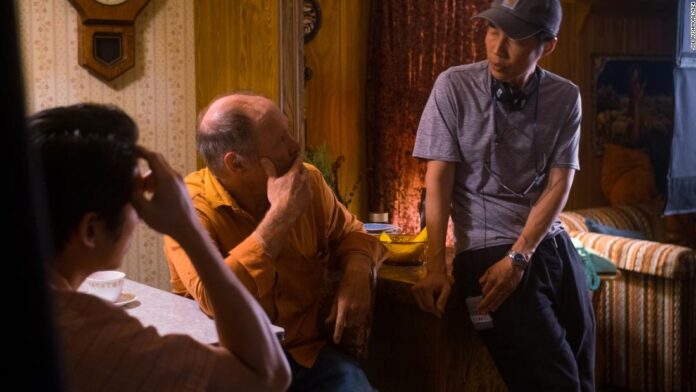 “Minari” writer-director Lee Isaac Chung told CNN in a recent interview that he knew he wanted to tell the story in Korean. But he feared that would be a tough sell — not for audiences, who he felt would connect with a good story when they saw one — but for would-be backers.
“My concern was, would anyone finance this film if it is not in English? … I was in a position in which nobody knows who I am. Nobody knows what this story is,” he said.
“You know, it’s about a bunch of farmers who are chicken sexers. It doesn’t jump off the page as being a commercial endeavor.”
So Chung also wrote a version of the script with more English in it, just in case.
Luckily, Chung says, producer Christina Oh, who’s also Korean American, supported his vision.
“She was very adamant from the start that we have to do this in Korean, the way that we grew up. … She said as a producer, she’s going to go out and make that case, and make that fight. And I just trusted her,” he said.
Some English is spoken in “Minari.” But having the family at the heart of the story speak Korean at home added nuance and complexity to movie, Chung said.
“That adds, I feel, a layer of what this family’s actually going through and that sort of insular feeling that you have when the reality at home is different from the one outside,” he said, “and that you really try to preserve some of that reality within your own family as you feel it slipping away.”

In recent months, controversy erupted over the Golden Globes’ rules, which made “Minari” eligible for best foreign-language film but not best picture because more than 50% of the movie is not in English.
That’s raised serious questions about racism in Hollywood and calls for the Hollywood Foreign Press Association to reexamine its language requirements.
“It feels personal. … It feels like the ‘where are you from?’ question that Asian Americans always get,” says Nancy Wang Yuen, a sociologist and author of “Reel Inequality: Hollywood Actors and Racism” told CNN. “The assumption is that if you have an Asian face, you must not be from here.”
The United States has no official language. And more than 20% of the US population age 5 and over speaks a language other than English at home, according to census data.
“More than 350 languages are spoken in American homes today. So what does ‘foreign’ language mean?” said Charlene Jimenez, director of entertainment partnerships and advocacy for the nonprofit Define American.
Jimenez argues it’s long past time for the association to reevaluate the criteria it uses for its prestigious prizes.
“It’s a really important time for us as an American society to be investigating our own prejudice about films like this, about stories like this, about immigrant stories — what does and does not resonate as ‘American’ to people.”

Chung thanked the association for the honor in his acceptance speech Sunday night while also alluding to the broader conversation.
“i just want to say that ‘Minari’ is about a family,” Chung said, accepting the award with his daughter’s arms around his neck. “It’s a family trying to learn how to speak a language of its own. it goes deeper than any American language and any foreign language. It’s a language of the heart. And I’m trying to learn it myself and pass it on. And I hope we’ll all learn how to speak this language of love to each other, especially this year.”
Chung recently told CNN he doesn’t feel like competing in the best foreign-language film category dishonored his work, but he understands the frustration many have expressed.
“I understand it in the context of being Asian American and having felt at times there are situations in which you feel as though you’re being treated as a foreigner, and that includes when you’re speaking Korean or a different language and, you know, you hear comments,” he said.
But Chung sees another side to it, too.
“My grandmother, if she were still alive, she’d be very proud that I held through and did a film in Korean and didn’t compromise and then start using that foreign language of English,” he said.