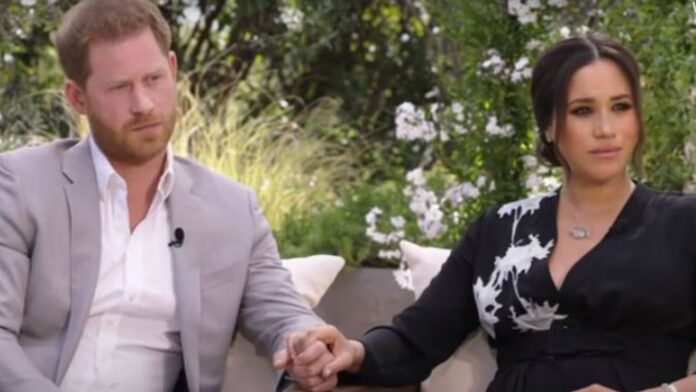 Prince Harry has said he feared “history repeating itself” and the process of leaving royal life has been “unbelievably tough” for him and his wife Meghan.

The couple – also known as the Duke and Duchess of Sussex – have spoken to Oprah Winfrey about life in and out of the Royal Family.

The interview with Winfrey, who lives near the couple’s new home in Montecito, California, will be screened in the UK on 8 March, a day after it airs in the US.

In one of two 30-second promo clips released by CBS on social media, Harry says: “I’m just really relieved and happy to be sitting here talking to you with my wife by my side.”

As a photo was shown of him as a child with his mother, Princess Diana, he continued: “Because I can’t begin to imagine what it must have been like for her going through this process by herself all those years ago, because it’s been unbelievably tough for the two of us.

“But at least we have each other.”

The Duke and Duchess of Sussex were shown sitting outdoors beside each other, Harry in a grey suit and Meghan – who is pregnant with their second child – in a black dress.

A second clip contains Harry saying: “My biggest concern was history repeating itself” but the remainder is dominated by Winfrey, with statements such as: “You said some pretty shocking things here,” and “almost unsurvivable – sounds like there was a breaking point?” without any indication of what she is referring to.

Meghan’s answer is not heard in either of the two clips.

Harry and Meghan married at Windsor Castle in 2018 and their son Archie was born a year later.

But the couple stepped away from full-time royal life in March 2020, unhappy about the media scrutiny, intrusion, restrictions of their roles, and racist attitudes shown by some towards the duchess.

Last month, it was confirmed that they would not return to royal duties, meaning Harry will give up his honorary military titles.