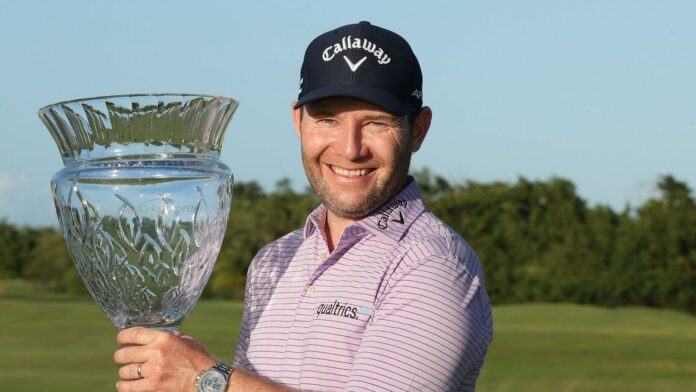 Just five weeks after the death of his father, Branden Grace claimed a thrilling victory at the Puerto Rico Open after finishing eagle, birdie to edge out Jhonattan Vegas

Vegas was looking good for a playoff at worst when he made his eighth birdie of the final round at the last to card a 65 and take the clubhouse lead on 18 under, but Grace launched a huge drive down the par-four 17th and holed out from a greenside bunker for a thrilling eagle-two.

And there were no slip-ups from Grace at the long final hole, and he rattled in a confident four-foot putt for the winning birdie to clinch his first win since his home South African Open in January last year.

Grace, whose only previous PGA Tour win was at the RBC Heritage almost five years ago, kept a bogey-free card in his closing 66, his victory securing a two-year exemption as well as 300 FedExCup points.

The success represented “light at the end of the tunnel” for the 32-year-old, who missed the cut in 12 events following his win on home soil last year and posted only two further top-10 finishes, while he is also mourning the death of his father five weeks ago.

“What a special week,” he said. “It’s been a very tough couple of years, and a tough couple of months, and it’s just nice to have all the support back home with my wife and my son and my family and everybody back home. After all that we have been through, there’s some light at the end of the tunnel.

“I didn’t really get frustrated, stayed patient, played the right shots at the right time and was aggressive when I needed to. And obviously it was a fairytale end, holing out the bunker shot on 17, making the eagle, and then having a clutch up-and-down on 18 to win by one.”

Vegas had mounted a significant early challenge when he birdied four of the first six holes as overnight joint-leaders, Grayson Murray and Rafael Campos, struggled to keep pace.

Vegas picked up another three shots in four holes around the turn, but his lone bogey of the day at the 14th was to prove pivotal as Grace pipped him to the title.

Murray needed an eagle at the last to force extra holes against Grace, but his wayward drive found a hazard and he would end with a bogey six to finish tied for third with Campos as both fired disappointing 70s.