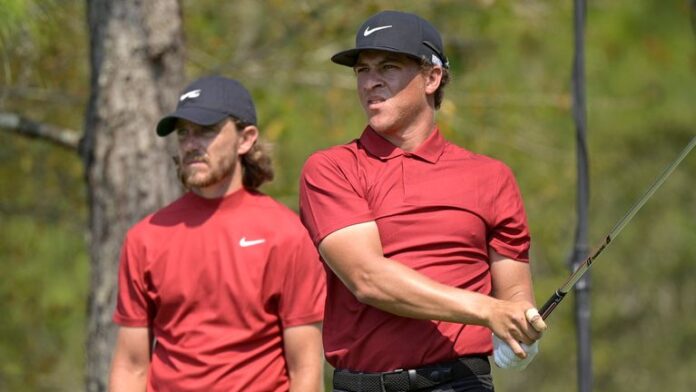 Tiger Woods expressed his gratitude for the huge show of support from many of the players on the final day of the WGC-Workday Championship at The Concession.

Rory McIlroy and Patrick Reed were among the stars to show their support for Woods as they played their part in turning the course into a sea of red and black for the final day.

Woods was clearly appreciative of the number of players who donned his famous Sunday outfit as he watched the action unfold from his hospital bed in Los Angles, where he is recovering from his horrific car crash on Tuesday morning.

“It is hard to explain how touching today was when I turned on the tv and saw all the red shirts,” Woods wrote on his Twitter account. “To every golfer and every fan, you are truly helping me get through this tough time.”

Ryder Cup rivals McIlroy and Reed were paired together for the final round, and both were clad in red shirts with black trousers, shoes and caps along with a number of the field, including Tommy Fleetwood, Cameron Champ and Jason Day.

“I guess, for us, it’s just a gesture to let him know that we’re thinking about him and we’re rooting for him,” said McIlroy after he finished tied for sixth. “Obviously things are looking a little better today than they were on Tuesday, but he’s still got a way to go. He’s got a huge recovery ahead of him.

“But I think just for everyone to show their appreciation for what he means to us out here. If there was no Tiger Woods, I just think the Tour and the game of golf in general would be in a worse place. He’s meant a lot to us, he still does mean a lot to us and I think that was just a little way to show that.”

Even a few of the caddies joined in with the occasion, while some of the volunteers at the course were seen wearing Tiger Woods tribute face coverings.

It is hard to explain how touching today was when I turned on the tv and saw all the red shirts. To every golfer and every fan, you are truly helping me get through this tough time.

The trend was also recognised at the Puerto Rico Open, co-sanctioned by the PGA Tour, where the entire maintenance staff were dressed in red and black for Sunday’s final round.

Woods, who was battling to be fit for the Masters after undergoing another back procedure at the end of December, is now unlikely to play this year after he lost control of his car near Los Angeles earlier this week.

His vehicle rolled a number of times, and the 45-year-old was rushed to hospital for emergency surgery on “significant injuries” to his right leg, with multiple fractures and a shattered ankle.

After being moved to Cedars-Sinai Medical Center for a further procedure, Woods’ team issued an update on his condition and declared he was “recovering and in good spirits”.

The Los Angeles County Sheriff insisted that Woods did not appear impaired by drugs or alcohol when he was pulled from the wreckage, and that he was not expected to face any criminal charges relating to the accident.