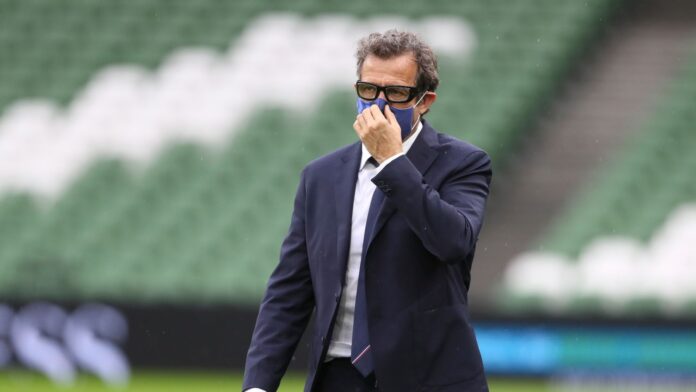 France head coach Fabien Galthie retains the support of his federation after it emerged he left the squad’s bubble on the opening weekend of the Six Nations to watch his son play rugby.

France’s round three game against Scotland on Sunday was postponed because of an outbreak of coronavirus, with Galthie providing the first positive test after a 15-13 victory over Ireland in Dublin on February 14.

Maracineanu has threatened to withdraw France from the Six Nations amid reports that players went out to eat waffles while in Rome to face Italy in round one.

But French Rugby Federation president Bernard Laporte has now revealed that the day after the 50-10 win over Italy, Galthie attended the Stade Jean-Bouin in Paris to see his son Mathis play.

“For me, he has the right to leave from the moment he is masked. He was outside,” Laporte told France 3 television channel.

“He watched the match alongside (Stade Francais director general) Thomas Lombard, who himself is tested every three days and also wore a mask. I don’t see where the problem could be. But then again I’m not a doctor.

“Why wouldn’t I support him (Galthie)? I am not a prosecutor. And it’s not because I really like Fabien. He knows very well that I don’t give gifts to people.”

The Six Nations have yet to reveal a date for the re-arranged match between tournament favourites France and Scotland.

The Apple spring event is actually happening on April 20 for...