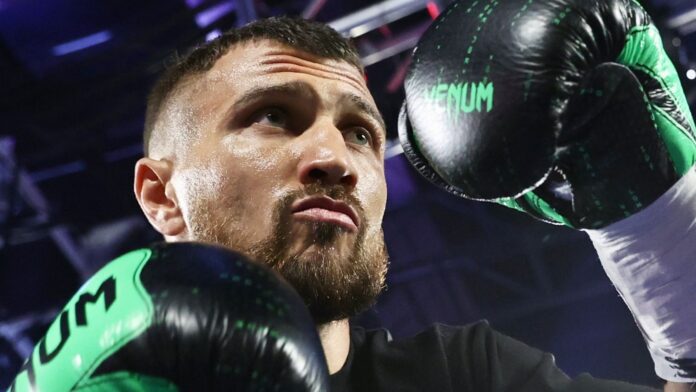 “I’m waiting for you cowards to decide on a real fight, and not on a Twitter fight”; Vasyl Lomachenko responded to Haney’s challenge, stating he would relish an intriguing lightweight clash against the American

Vasiliy Lomachenko and Devin Haney traded insults on Twitter after the Ukrainian reacted angrily to a question about his absence since defeat by Teofimo Lopez.

Lomachenko seems to have stepped out of the spotlight after suffering just the second loss of his professional career to Lopez in October, while Haney defended his WBC title with a points win over Yuriorkis Gamboa in November.

Despite Haney’s 25 straight wins, Lomachenko would represent his stiffest challenge to date, with the southpaw having become a pound-for-pound star before his shock setback at the hands of Lopez.

But the unbeaten 22-year-old remains unfazed and sparked the Twitter exchange by asking: “Where is Loma at!?!?!?”

“I’m here! I’m waiting for you cowards to decide on a real fight, and not on a Twitter fight,” Lomachenko fired back.

Haney replied: “Waiting is not your best bet. I would think you learned that from the Teo fight.”

Lomachenko then took a swipe at Haney’s record, tweeting: “Waiting is your favorite action, because you still haven’t fought with anyone.”

The lightweight division is hotly contested, with Lopez, Ryan Garcia and Gervonta Davis also vying for supremacy at 135 pounds.

Lopez is considered the No 1 fighter, having unified the WBA, WBO and IBF titles with a dominant unanimous decision victory over Lomachenko.

Garcia is the mandatory challenger to Haney’s WBC belt, but has also called out Floyd Mayweather’s protégé Davis for a mega fight.

Lomachenko is the oldest of the elite crop but is the most accomplished, having won two Olympic golds in an incredible amateur career which saw him lose only once in 397 fights.

The heated Twitter exchange with Haney would suggest his desire remains as strong as ever as he bids to re-establish himself as the finest lightweight in the world.