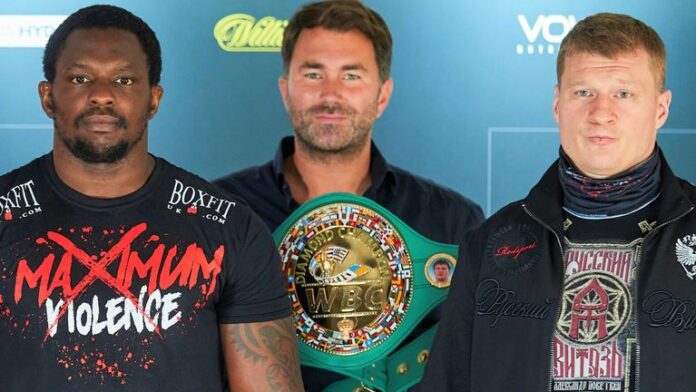 “We are ready for the fight, we want this fight”; Alexander Povetkin is in confident mood ahead of his heavyweight rematch against Dillian Whyte in Gibraltar on March 27, live on Sky Sports Box Office

Alexander Povetkin insists he remains “ready to fight” despite the new date and venue for his heavyweight rematch with Dillian Whyte.

Povetkin vs Whyte 2 will now be held in Gibraltar on March 27, live on Sky Sports Box Office, after travel restrictions meant the bout had to be pushed back three weeks.

The Russian has recovered from coronavirus, which previously forced the fight to be delayed, and will intensify his preparations with sparring in Krasnodar.

“I feel fine. I’m ready to fight,” said Povetkin. “The team and I are in a good mood.

“We are ready for the fight, we want this fight.”

Asked about the latest postponement, Povetkin said: “Anything can happen. I reacted normally.

“What can you do? We made some changes and go on.”

Whyte will be attempting to avenge a shock defeat last summer when he floored Povetkin twice in the fourth round, only to suffer a dramatic one-punch knockout in the fifth.

A rematch win will propel ‘The Body Snatcher’ back into world title contention after he endured a lengthy wait for a shot at the WBC belt, and promoter Eddie Hearn is excited to see how things unfold later this month.

“In the current environment we are always having to think on our feet,” said Hearn.

“Now we have something outside the box, compelling, and a unique setting for one of the heavyweight fights of the years – roll on the Rumble on the Rock!”