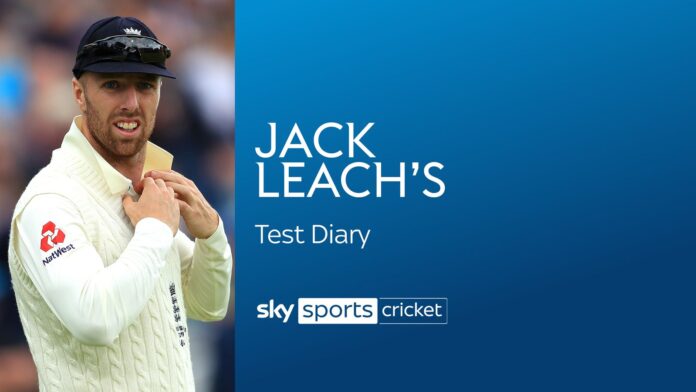 Jack Leach discusses adapting to conditions, learning from the subtleties of Ravichandran Ashwin and an exciting opportunity for England in the fourth Test…

There has been a lot of talk from outside the group about pitches but for us it has not been about that at all, it’s been about how we can improve. We got outplayed in the third Test, India bowled really well and, as a spinner, I’ve been doing a bit of soul-searching; I felt I bowled well but you have to try and find ways of being even more effective on those kind of wickets.

We have won three out of five in the subcontinent this winter – two in Sri Lanka and one in India – and if we win this big game starting on Thursday, we can look back at the last couple of months and be happy with our work.

That’s a big positive for us as a group, and individually, with the lack of cricket I had leading into this winter’s cricket, this is the first time I’ve played in India and no warm-up games, six days of quarantine pretty much straight into a Test match – all these things were going to make it a hard experience and it has been exactly that.

It’s been very tough, but I think I’ve come through well so far. I’m pleased with the wickets that I’ve taken, bowling to some of the best players in the world in their own backyard – I don’t think I’ll get a better four-for, names-wise, than Rohit Sharma, Cheteshwar Pujara, Virat Kohli and Ajinkya Rahane in the last match – and I feel like I’ve held my own really; that gives me a lot of confidence moving forward.

That’s not me saying I’m the finished article, it’s just given me a lot of confidence that if I keep working hard, I’ll keep making improvements and I can be an effective international bowler in lots of different conditions.

I’m doing the best I can, as is everyone out here, and we’re all keen to learn and are excited by the challenge; you have to be because if it was all easy then it wouldn’t be Test cricket and it wouldn’t be as much fun when you have those good moments. It’s something that I’m relishing.

When you see players having so much success, like Ravichandran Ashwin, who has just got to 400 Test wickets and has a lot of experience in India, and Axar Patel, who has had a great start to Test cricket, of course, you try to learn from them.

It’s important not to look at it too emotionally though and think ‘I just want to bowl exactly like them!’. Ashwin is right-arm, for a start, so I’m not going to bowl like him! Even Axar, he’s a left-arm spinner, but he’s taller than me – I can’t change my height!

You’re also a product of where you grow up and I’ve tried to make my bowling effective for playing in England, most of my bowling is done there and I need to keep hold of the skills that I have for playing in my home conditions. Then I try to add subtle things that I see in other people to be effective over here too.

Ashwin is very clever in how he changes his seam position; he’ll bowl to the same spot but the way it gets there and whether it hits the seam or hits the lacquer varies and the ball reacts very differently.

Then Axar is someone who seems to present every ball the same, a squarish seam, then a few skid on and the odd one grips – that has been so effective on the wickets we’ve played on.

Ahead of the pink-ball game, I worked on getting the ball to go straight or skid on, on a spinning pitch. As we saw in the last Test, sometimes the balls that don’t spin are more dangerous than the balls that do so if you can create that inconsistency in your bowling that allows the ball to react differently off the surface then that is a real lethal weapon.

I was really pleased with the way I got the wickets, lbw and they were all from straight balls, obviously the balls before spin and then you get the wicket with the straight one.

It is very different to bowling in England where you’re trying to put as much energy as you can on every ball that you bowl and because the wickets are better and there is less spin, you get that inconsistency from the pitch by trying to put lots of revs on the ball, a few might skid and one will spin.

So it is important to look at others but also to remember your strengths and just add subtle things rather than make big changes.

Jeetan Patel has helped me with that and he has been confirmed as the new spin coach on a permanent basis now. He’s obviously had a great career and has been someone that I’ve enjoyed watching and playing against – he got me out a lot in county cricket and still does in the nets!

He’s been brilliant for me and the other spinners – he’s been really supportive and I haven’t got a bad word to say about him.

Going into the fourth Test, we have to be ready for anything. I don’t tend to look at pitches before we play on them because I don’t want it to be a distraction. My approach is always just to wait, bowl on it and see what happens. You can work it out when you’re out there.

You would expect that it will probably be a similar type of pitch and with the red ball, it might spin a bit more consistently, but we’ll have to wait and see. We’re well up for it and we see it as a great opportunity to put what we’ve learnt into practice and come away with a 2-2 draw.

We knew how tough it was going to be and that the series is still alive is something we should see as a massive positive and can use as a big motivation going into this last game.

As a side, our aim is to get to No 1 in the world but it’s not just a straight line to that, there are going to be bumps in the road. We just have to learn from them as quickly as possible and adapt – it’s an exciting week ahead.

Follow text commentary from the fourth Test between India and England in Ahmedabad on skysports.com and the Sky Sports app from 3.30am on Thursday.