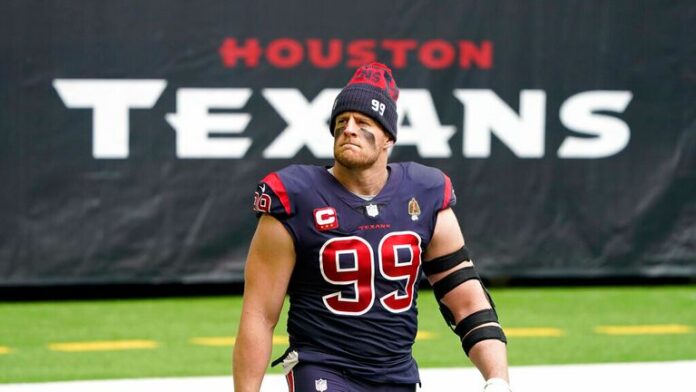 JJ Watt took to Twitter on Monday to reveal that he will be joining the Arizona Cardinals in free agency; this came after speculation linking him to three other NFL franchises, which sourced from a false Peloton account

JJ Watt is set to move to the Arizona Cardinals, following his departure from the Houston Texans after 10 years.

Watt broke the news himself, posting a picture on Twitter of him wearing a Cardinals top.

According to reports, the Cardinals are giving Watt a two-year, $31m deal that includes $23m guaranteed.

The star defensive end has been named NFL Defensive Player of the Year of three occasions, and he was linked with several franchises in recent weeks.

Earlier on Monday, Watt had taken to Twitter to douse widespread reports that a change in his Peloton bio – with the words: “SB56…GB…CLE…BUF” – implied the Green Bay Packers, Cleveland Browns and Buffalo Bills could be his next destination.

Watt said he doesn’t own a Peloton.

He soon returned with another post to clear up the situation, revealing he is now going to Arizona.

Watt announced his departure from Houston last month, and given his profile, the 31-year-old’s next move has been one of the most closely-monitored stories of the NFL off-season.

He will be hoping to improve the Cardinals’ fortunes, after they missed out on the playoffs in the 2020 season after finishing 8-8.

For updates on the tags, free agency and the Draft, be sure to follow along at skysports.com/nfl and on Twitter @SkySportsNFL.