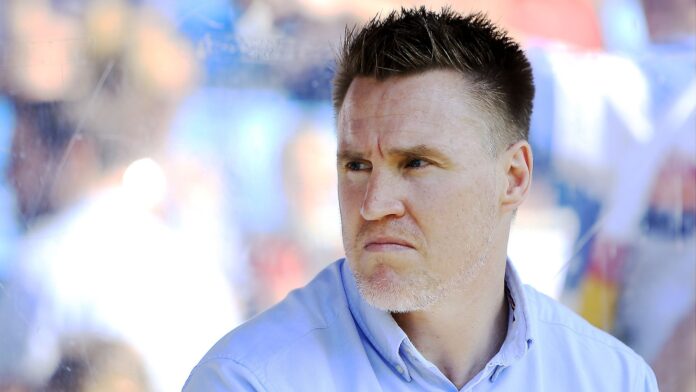 Salford boss Marshall is preparing for his first season as a Super League head coach. “Our general skill levels and fitness have improved, but I think they can get better, and just our general philosophy on how I think the game should be played,” he said.

A week before Christmas last year, Richard Marshall held his first get-together with the Salford Red Devils squad to outline his vision for moving the club forward after succeeding Ian Watson has head coach.

Marshall’s view was clear: The team had done well in the past two years to reach two major finals against the odds and had been left in a good place by now-Huddersfield Giants head coach Watson, but there was still room for improvement.

Adjustments to how the team transition between defence and attack, their kicking game, improving in their contact in defence and letting former Castleford Tigers half-back and coach Danny Orr work his magic with the outside backs have all formed part of pre-season training.

And with around a month to go until the 2021 Super League season gets underway – ironically, with an early reunion with former boss Watson and his Huddersfield side – Marshall is pleased with how the Red Devils are shaping up, although he is still striving for more improvements.

“There are certain elements any coach wants to have an input in,” Marshall said. “Our general skill levels and fitness have improved, but I think they can get better, and just our general philosophy on how I think the game should be played.

“Sometimes I think we can play a little too conservatively, so I want us to try to express ourselves when the opposition are least expecting it.

“I think that’s an important attribute for any team to have, but also being a little bit more determined and dogged defensively.”

Marshall arrived at Salford from St Helens, where he was part of the backroom staff under both Justin Holbrook and Kristian Woolf as Saints claimed Grand Final glory in 2019 and 2020.

It was Holbrook who brought the former Ireland international prop to the Totally Wicked Stadium to replace Sean Long as assistant coach, and one player who has now worked under both is Salford centre Kallum Watkins.

The 29-year-old spent some of last year playing for Holbrook at NRL side Gold Coast Titans and has already noticed similarities between how the Australian and Marshall operate.

“He’s got that intensity about him, but the attention to detail is big with him,” Watkins said. “From my time at Gold Coast with Justin Holbrook, he’s implemented a few things Justin did.

He’s got that intensity about him, but the attention to detail is big with him.

“A lot of what we do about the skills and stuff we do is pretty similar to what Justin did for us at Gold Coast.

“He’s enthusiastic, he wants to be successful and it’s a bit thing for him being a Super League head coach for the first time, which is great.

“But a lot of the experience he’s had at previous clubs, he’s bringing that into the players and he’s challenging us as well.”

Although this is his first head coach role in Super League, Marshall arrived at the AJ Bell Stadium with an extensive coaching career which began as assistant to Tony Smith at Warrington Wolves, as well as being involved in the England Knights and Academy set-ups.

He then returned to former club Halifax for his first head coaching job in 2015, leading the part-time Championship side into The Qualifiers to face Super League opposition on several occasions under the previous league structure.

The experiences of having to do tasks such as washing the players’ bibs and arranging matchday doctors while in the second tier have served the 45-year-old well and he looks back on those four-and-a-half seasons as the perfect apprenticeship.

“It’s just the same as players, you wouldn’t throw them into first grade without a couple of reserve and academy games,” Marshall said. “It’s a great learning ground and a great journey.

“The teams are quality and the Middle Eights competition a couple of years back pitted Halifax against the likes of Leeds and Warrington.

I’ve got those experiences of bigger games for Halifax and as a coach, you want to coach at the highest level and coach a team to finals.

“I’ve got those experiences of bigger games for the club and as a coach, you want to coach at the highest level and coach a team to finals.

“I think I’ve had a really good grounding as a coach and there are some really good coaches out there in the Championship.”

Working under the last two Super League title winners in Holbrook and Woolf has seen Marshall learn plenty too and although the two are very different coaches in terms of their styles, there are plenty of traits they share.

Marshall is keen to ensure the players take an active role in shaping Salford’s playing philosophy too and is impressed with how the squad have contributed so far during pre-season.

“They’re both different characters with different philosophies, but at the same time they got the best out of their players individually and collectively,” Marshall said.

“At the same time, my style is collaborative, I want the players to come up with plays and plans and be accountable for their actions.

“There are a lot of metrics we look at aside from the GPS as indicators in games of effort and skill, and they’re coming up with some of those which I think is really important.

“We’ve got the buy-in, but that doesn’t mean you win games. It means the players are committed every week and at the moment in pre-season, that’s fantastic for us.”