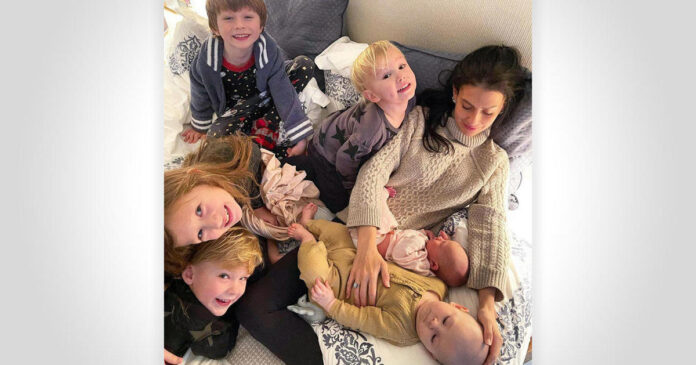 Hilaria Baldwin announced on Monday that she and her husband, Alec Baldwin, have welcomed their sixth child together — less than six months after she gave birth to baby number five.

Baldwin posted a photo on Instagram of herself and her children — Carmen, Raphael, Leonardo, Romeo and Eduardo — along with the newborn baby.

“7❤️📸Alec,” she captioned the photo. The newborn would be Alec Baldwin’s seventh child, since he also has a 25-year-old daughter, Ireland, with ex-wife Kim Basinger.

A week earlier, she posted a short video cuddling a newborn, with the caption: “Gratitude.”

The Baldwins had not publicly announced they were expecting another baby. Hilaria, a yoga instructor and actress, announced the birth of her fifth child on September 8, 2020. She had previously opened up on social media about suffering two miscarriages.

Baldwin took a break from social media in late December after internet sleuths raised questions about her claims of Spanish heritage. After making several apologies on Instagram, she took a hiatus from posting until February 5, then wrote: “I’ve spent the last month listening, reflecting, and asking myself how I can learn and grow. My parents raised my brother and me with two cultures, American and Spanish, and I feel a true sense of belonging to both.”

She said she could have better explained her deep connections to two cultures, that she’s proud of the way she was raised, and that she and her husband are raising their kids with the “same love and respect for both.”

“Being vulnerable and pushing ourselves to learn and grow is what we’ve built our community on, and I hope to get back to the supportive and kind environment we’ve built together,” she continued. Baldwin, who for years has used a Spanish accent and emphasized her Spanish heritage, grew up in Boston but spent time with family in Spain.

Throughout her posts since, Baldwin never mentioned another baby on the way. It is unclear whether the newest addition to the family was born via surrogate or was adopted. CBS News has reached out to Baldwin for more information.