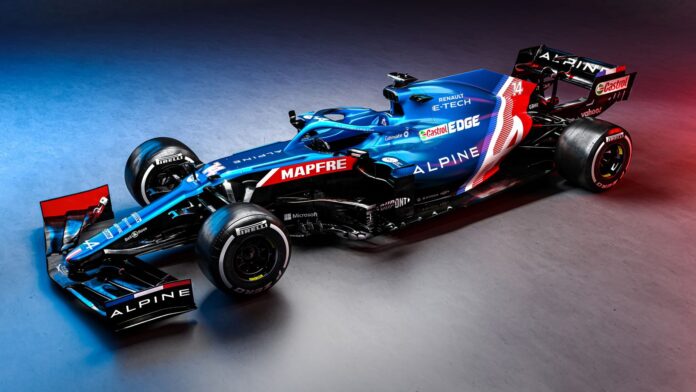 This is the car returning two-time champion Fernando Alonso, and Esteban Ocon, will be driving as Alpine kickstart their new era with blue, white and red Formula 1 car; Renault have rebranded as performance sub-brand Alpine for 2021

Alpine have launched their first-ever Formula 1 car and livery for the 2021 season, with Renault’s rebranded team revealing a blue debut look.

Alpine are a new name for 2021 after Renault decided to give their niche performance sub-brand the full F1 treatment, and stayed true to their promise of incorporating the French tricolour flag onto their challenger – which Fernando Alonso will be driving this year on his return to the grid.

The new-look car, named the A521, radiated blue with splashes of red and white, ditching the yellow and black colour scheme which Renault used from 2016 to 2020.

The Alpine name, which has motorsport pedigree through endurance and rally programmes, is also prominent throughout.

Excitement about Alpine’s arrival isn’t just generated by a new name and look, with the return of two-time world champion Alonso also an intriguing prospect for the team and F1.

While Alonso, who is recovering from a fractured jaw following a cycling accident, was not present at the team launch due to travel restrictions, he is determined to succeed after two years away from F1 – and somewhat indirectly with the Renault team he secured back-to-back titles with well over a decade ago.

Alonso will be partnered by Esteban Ocon, the young Frenchman who is looking to kick on after struggling next to Daniel Ricciardo in 2020.

Proudly representing the colours of the French and British flags, as well as Alpine’s illustrious and historic racing colours of blue, white and red… Here is our 2021 F1 car, the A521!#A521Launch 💙 pic.twitter.com/AwDI1RNtaE

“Driving the car for the first time is going to be a very exciting experience and I hope both factories can saviour the moment. We have a strong team and together with Esteban we must push on from last year and deliver results.

Explained: Who are Alpine?

Although a new name to F1, Alpine have made racing and sports cars since the 1950s and – after being bought by Renault in 1973 – have worked closely with their fellow French manufacturers since. The Alpine name has been used periodically for Renault’s rallying and endurance programmes, and an Alpine-Renault won the 1973 World Rally Championship, and the 1978 Le Mans 24 Hours.Alpine ceased production in 1995 but the marque was revived in 2017, before Renault decided to give its brand the ultimate platform in F1.

“We know it’s going to be a very competitive season, but we’re ready for the challenge. The car looks great and I have fond memories of racing with blue in Formula 1.”

Alpine also have a new backroom team, with Cyril Abiteboul leaving earlier this year. Laurent Rossi has been hired from within Renault to become the Alpine CEO, while ex-Moto GP team boss Davide Brivio is the new racing director.

Renault finished fifth last season but have been consistent midfield front-runners in recent years, and Alpine will be targeting 2021 improvement ahead of a big 2022 push with F1’s new rules overhaul.