Home World Bitcoin is surging as an inflation hedge, but don’t count out gold... 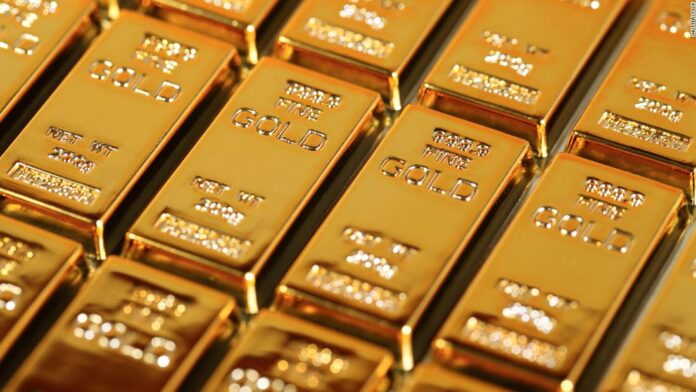 But gold has recently lost some of its luster thanks to a new financial kid in town: bitcoin. Gold prices are down about 9% this year and are trading nearly 15% below the all-time high of more than $2,000 an ounce set last summer.
Meanwhile, bitcoin has soared nearly 70% and is currently hovering just below $50,000 per coin — not far from the record high it reached last month.
Still, fans of gold think the yellow metal is due for a rebound — even if bitcoin continues to march higher as well.

The tried and true inflation hedge

Gold is a classic fear trade. Prices rallied last year on worries about coronavirus lockdowns crippling the global economy. But gold also does well when investors are worried about inflation — as they are now.
Plus, the price volatility of bitcoin may make it less attractive than gold to many big institutions looking to protect their cash, despite recent decisions by the likes of Tesla (TSLA) and MicroStrategy (MSTR) to hold bitcoin on their balance sheets.
“Investors need a serious hedge against inflation, and bitcoin may not offer that,” said Ipek Ozkardeskaya, senior analyst with Swissquote, in a recent report.
Some investors think inflation fears could run rampant again if the US Senate passes President Joe Biden’s proposed $1.9 trillion stimulus package. There are questions about whether that much money is really needed now that there are multiple Covid-19 vaccines and more people are returning to work.
The worry is that all the federal stimulus money will eventually cause the economy to overheat, leading to even higher inflation. That, in turn, could boost gold prices further.
“The reason that we see higher gold prices is also mainly because the US House passed the stimulus package. We have a real fear of higher inflation,” Naeem Aslam, chief market analyst with AvaTrade said in a report, adding that more stimulus will “only fuel the fire” of inflation.
Analysts at European asset manager Amundi are also concerned about a sudden spike in inflation due to higher interest rates as the US economy recovers.
They argue that investors need to “stay vigilant” and get ahead of this inflation scenario and that buying gold is one way to do so.
“Gold could also provide support amid abundant liquidity in the current environment,” the Amundi analysts wrote in a report.
Analysts from UBS Global Wealth Management also said in a report Tuesday that the recent pullback in gold looked “overdone” and that —”spikes in market uncertainties…could offer support in the short run.”

But bitcoin may be beating gold for good reason

Still, a gold rebound doesn’t have to coincide with a bitcoin pullback. In fact, cryptocurrencies could continue be a good bet at a time when bond yields are expected to keep climbing.
“Gold is good for slightly higher inflation but not necessarily much higher real interest rates,” said Brad Neuman, director of market strategy at Alger, in an interview with CNN Business.
Neuman said that although inflation is often accompanied by rising rates, the problem is that rates can spike dramatically and hurt the returns on gold. That might be one of the reasons it has lagged bitcoin lately.
As such, Neuman thinks bitcoin — as well as crypto-related companies such as PayPal (PYPL), which now allows users to trade and hold bitcoin on the platform — could be even better bets than gold.
Bitcoin backers also point out that the cryptocurrency likely will remain popular with investors who view it as a store of value during times of inflation — just like gold.
The biggest reason bitcoin has surged this year probably has more to do with the fact that investors have come to recognize that the cryptocurrency is even more scarce than gold or other precious metals.
There is a cap of just 21 million bitcoins built into its source code. And roughly 18.6 million are already in circulation.
“There is a finite number of coins. That is why bitcoin can replace gold,” said Steve Ehrlich, CEO of Voyager Digital (VYGVF), a cyptocurrency brokerage firm. “It really is more like digital gold and not necessarily a medium for payment.”
Most consumers are unlikely to use gold or bitcoin to actually buy anything, but both assets could wind up being investment winners at a time when consumer prices are rising.

Cuba’s Raul Castro steps down, ending the era of his famous clan at the country’s helm