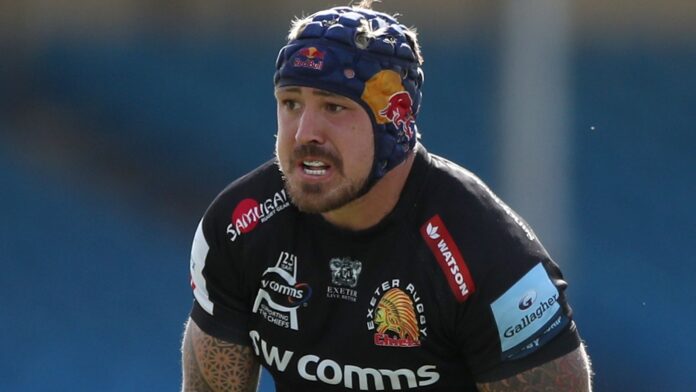 Nowell has been out all season after operation on damaged toe ligaments; Exeter boss Rob Baxter: “We are going to have to wait a little while longer to get him back to full fitness.”; Baxter hopes Nowell may still be able to enter contention for Lions selection

Exeter and England wing Jack Nowell has suffered a setback in his bid to recover from injury.

Nowell has not played this season after undergoing surgery on damaged toe ligaments, with his last appearance being Exeter’s Gallagher Premiership final victory over Wasps last October.

Exeter rugby director Rob Baxter said: “Unfortunately, Jack has had another issue as he has got back into full training, so I think it is going to be a little while before we see Jack.

“At this stage, it is a bit early for me to give you the full extent of the injury. It is just one of those things.

“We kind of held Jack back for a week, to give him a couple of weeks of full training.

“And unfortunately, later on in the second week, it was just one of those things, he pulled up with another injury and now we are going to have to wait a little while longer to get him back to full fitness.”

Nowell won the last of his 34 England caps during the 2019 World Cup in Japan, while he toured New Zealand as a member of the 2017 British and Irish Lions squad.

And Baxter does not believe that Nowell’s hopes of making the Lions squad to face South Africa this summer will necessarily be affected by not playing Test rugby.

He added: “He (Nowell) is a guy who loves playing rugby, loves training and getting on with things.

“And obviously he has got some concerns that this probably means he won’t play international rugby this (season), and there is a British and Irish Lions tour at the end of this season he is desperate to be involved with.

“He is very aware of those things.

“Without doubt, I know the Lions management will be looking at players beyond just those playing international rugby, especially those who have played international rugby recently and only haven’t been involved because of injuries like this.

“I am very aware his Lions selection will not only be decided on whether he has played for England, and the only thing I can encourage him to do is stay energised and rehab well and come back strong, and there will be enough rugby left with Exeter.

“Hopefully, we will be in those big games where he can showcase his talent.

“That is the only thing Jack can aim for now.”