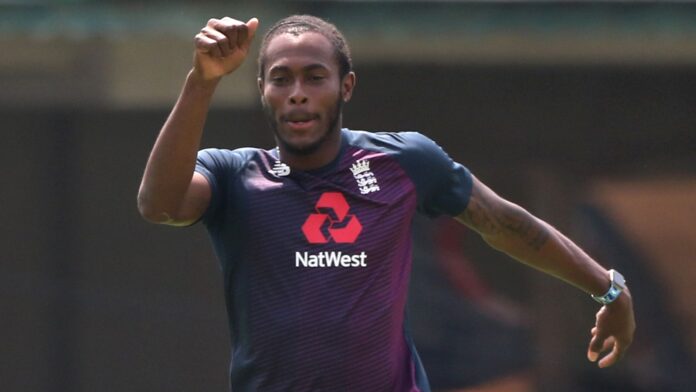 England bowler Jofra Archer ruled out of fourth and final Test against India due to right elbow issue; ECB will provide further update in due course; Ben Stokes troubled by upset stomach but top-scores for England with 55 on day one in Ahmedabad

England fast bowler Jofra Archer is missing the fourth and final Test against India in Ahmedabad due to an ongoing right elbow issue.

Archer sat out the second Test in Chennai due to his elbow problem but returned for the pink-ball third Test in Ahmedabad, although he only bowled five overs with that game over inside two days.

The 25-year-old – who was rested for the series win in Sri Lanka in January – is currently part of England’s squad for the five-match T20I series against India, which starts on March 12.

An England and Wales Cricket Board spokesman said: “Jofra Archer is not playing in this Test match due to his ongoing right elbow issue. The ECB medical team will provide an update in due course.”

Archer suffered a stress fracture in his right elbow in South Africa last winter and was ruled out of the Test series in Sri Lanka in the spring of 2020 before it was postponed to January 2021 due to the coronavirus pandemic.

England also confirmed that Ben Stokes is suffering from an upset stomach, something which has affected other members of the touring party in India.

The all-rounder top-scored with 55 in England’s first innings of 205 all out in the fourth Test and then went on to open the bowling alongside James Anderson, sending down two overs late on day one.

When asked by reporters over Zoom whether he would be 100 per cent during the Test, Stokes said: “I’ll tell you the truth, I’ll just have to wait and see, day by day.”

Follow text commentary from day two of the fourth Test between India and England on skysports.com and the Sky Sports app from 3.55am on Friday.