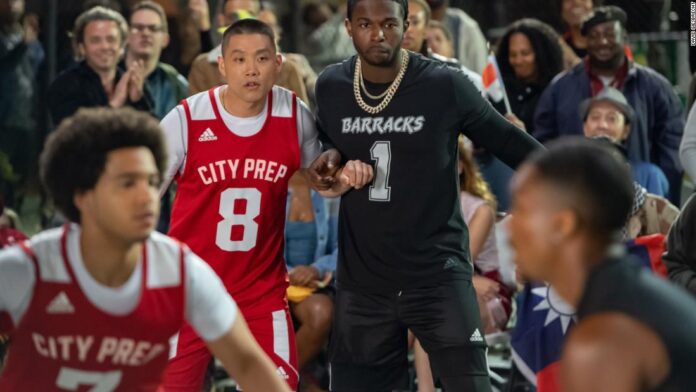 Like “Fresh Off the Boat,” his autobiography that became the basis for an ABC series, Huang explores the immigrant experience through the eyes of the family’s American-born son — in this case, a basketball prodigy who prefers the nickname Boogie (newcomer Taylor Takahashi), and has the swagger to go with his on-court skills.
Living in New York with his squabbling, unhappy parents, his dad (Perry Yung) has chosen basketball as the family’s lottery ticket, dreaming of a future that will see his son in the NBA. So far, though, the college scholarship offers aren’t rolling in, concerning Boogie’s mom (Pamelyn Chee), and raising questions about not-so-subtle racism regarding the prospects of an Asian player.
After that, though, everything about “Boogie” begins to fall apart, beginning with Boogie’s romance with a classmate (Taylour Paige), which falls mostly flat thanks to all kinds of clunky dialogue. The same goes for the sports plot, which hinges on Boogie’s inevitable showdown with the star of another school, Monk, played by rapper Bashar “Pop Smoke” Jackson, who was killed a year ago, and to whom the movie is dedicated.
Along the way, Boogie clashes with his coach (Domenick Lombardozzi), while mom enlists a manager (“Once Upon a Time … in Hollywood’s” Mike Moh) to help try to maximize her son’s chances, a situation that only creates further tension between the folks.
Huang has a knack for looking at Chinese-Americans in a way that exposes the inevitable conflicts between concerned parents and their very American kids, such as when Boogie’s dad talks about visiting home, to which Boogie responds, “Isn’t this home?”
Beyond that, though, the movie seems to be grasping for drama and crises, and as a not-small aside, shoots its basketball scenes in a way that largely drains any excitement or suspense out of them. Having an opponent fling ethnic slurs at Boogie as trash talk on the court might add an edge, but the problematic nature of that otherwise goes unaddressed.
In one of the better scenes, Boogie’s dad makes him watch tennis champ Michael Chang winning the 1989 French Open, reveling in the accomplishment by a Chinese-American in a way his son can’t quite understand.
A few more moments like that and “Boogie” might have fulfilled its potential. As is, Huang’s introductory effort exhibits ambition and energy but ultimately doesn’t look ready for the big leagues.
“Boogie” premieres March 5 in select theaters. It’s rated R.