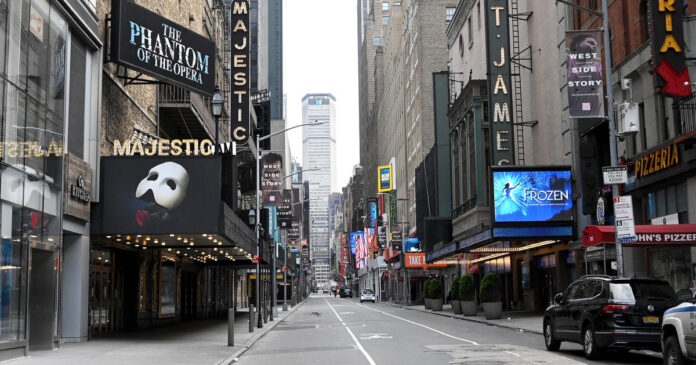 Alex Crothers’ Higher Ground once hosted packed crowds for the likes of Phish and Grace Potter, fan favorites at his South Burlington, Vermont, concert hall. After the coronavirus pandemic shuttered his hall last March, he kept busy by organizing online performances and creating a summer series of outdoor concerts.

After almost a year of scrambling to adapt to the harsh new reality, however, Crothers said he worries each day about staying in business. “We were the first sector to close and we will absolutely be the last one to reopen,” he said of the arts industry. “We are 348 days into this with zero revenue carrying that same overhead.”

Performing arts organizations around the U.S. continue to suffer, with theaters, concert venues and entertainment spaces still unable to reopen as the one-year anniversary of the COVID-19 lockdowns approaches. Joblessness remains high among performing artists, with almost 20% of workers in the arts, entertainment and recreation industries out of work as January — triple the overall unemployment rate, according to Department of Labor data.

Crothers and others in the performing arts have been holding onto hope that the $15 billion in pandemic relief funding allocated to the struggling arts and culture sector, as part of a $900 billion stimulus package that was signed into law on December 27, will help them survive until the fall, when they believe they might begin to reopen their theaters as more Americans receive the coronavirus vaccine.

But more than two months after it was allocated by Congress, the relief aid has yet to materialize — with arts organizations telling CBS MoneyWatch they haven’t been able to even apply for the grants.

The Small Business Administration, which is overseeing distribution of the $15 billion in arts aid, told CBS MoneyWatch that it is working on the program but can’t say when it will be ready to accept applications. That leaves performing arts venues desperately waiting for funding and unsure how long they can continue without it.

“It’s nothing short of devastating that we’re still waiting,” said Audrey Fix Schaefer, a board member of the National Independent Venue Association (NIVA), which was organized last year in part to help performing arts venues lobby Congress for federal aid. “There are venues still going under, and it’s been almost a year since we had revenue.”

While there’s no official tally of the number of performing arts venues that have closed in the last year, Fix Schaefer believes it could be in the hundreds. Arts and entertainment nonprofits are among the types of nonprofit organizations at highest risk of closing within the next two years because they depend on ticket sales and can’t reduce expenses, according to a new study from philanthropy research group Candid and the Center for Disaster Philanthropy.

Even as the arts industry continues waiting for help, Congress is negotiating another stimulus relief bill. At the same time, there are signs of economic recovery, with restaurants expanding capacity and some states scaling back restrictions. But the performing arts industry has yet to regain even a toehold, participants told CBS MoneyWatch. In New York City, for example, it’s the only sector where employment remains at less than half of its pre-pandemic levels, according to a February study from New York State’s comptroller.

“It is excellent that the economy is coming back in some sectors and never harmed in others, but this is one where there was utter devastation,” Fix Schaefer added.

Before the pandemic, the performing arts industry was no slouch when it came to economic muscle, accounting for 4.5% of U.S. gross domestic product — more than either construction or agriculture, according to a January analysis from FEMA and the National Endowment of the Arts.

Performing arts organizations have a ripple effect throughout the economy, attracting tourists to visit Broadway or festivals like Tanglewood in Massachusetts. Showgoers book hotels, make restaurant reservations and shop at local stores, with one study finding that every $1 in ticket sales equates to $12 in economic activity. The strength of the arts sector — and its rosy impact on industries from restaurants to hotels — is something that is often overlooked by both voters and lawmakers, experts say.

“The arts contribute more to the economy than most people think,” said James Marrone, associate economist at the RAND Corporation, who has been tracking the impact of the pandemic on the arts. “They exist in an ecosystem that relies on their success, but we really take them for granted.”

The economic lift provided by the arts doesn’t only help big cities like New York, where Broadway theaters, Lincoln Center and Carnegie Hall draw millions of ticket buyers each year, but also small cities and regional hubs. Across more than 300 regions in the U.S. — from Fairbanks, Alaska, to Jackson, Wyoming — the arts generated $166 billion in spending and supported 4.6 million full-time jobs, according to a 2017 study from Americans for the Arts.

“A lot of people may travel from out of state,” said Crothers of arts festivals and performances in his home state. “If you lose these [performance spaces], you’ll have a huge economic consequence, but also huge cultural consequences.”

“The word is ‘relentless'”

The ongoing hurdles facing the performing arts has had devastating personal impacts, as well. Performers who once counted their jobs as stable and well-paying are now facing an uncertain future, while navigating aid programs like unemployment to stay afloat.

“When I was thinking of everything we’ve gone through in the last year, the word is ‘relentless,'” said Joanna Maurer, an associate violinist with the Metropolitan Opera Orchestra whose husband is also a tenured member of the orchestra. Neither has been paid since April 1, 2020.

“We have days that are optimistic and good and others where we can’t sleep,” she said. “We are watching the savings account go down.”

Maurer said she’s grateful for unemployment aid, especially the extra weekly benefits provided through two stimulus bills. In December, lawmakers approved an additional $300 per week in unemployment aid that will expire on March 14, although Congress is currently negotiating President Joe Biden’s $1.9 trillion coronavirus relief plan, which would extend an extra $400 per week.

That has made “the difference of needing to move and not,” she said, adding she’s hopeful that lawmakers will extend the extra payments.

In the meantime, Maurer said a career change is at the back of her mind, although she’s not ready to make a move just yet. Instead, she’s focused on working with organizations to support musicians, such as the Local 802 musicians union, and working with a nonprofit called Save NYC Musicians.

“We worry about what will happen to our industry,” she said. “Is the Met going to be able to survive this? What if there are these new [COVID-19] variants and the vaccines don’t work? Are we going to have to sell our apartment? It’s all the unknowns that take over in our minds.”

“Repercussions for years and years”

The ongoing hit to the performing arts industry could have “repercussions for years and years,” said Anthony Mazzocchi, associate director of the John J. Cali School of Music at Montclair State University and an executive director of the Kinhaven music camp in Weston, Vermont.

Before the pandemic, almost all students typically picked an instrument in elementary school and learned the basics, although 50% would quit because of attrition, he added. But the stress of pandemic parenting and remote school has caused a sharp drop-off in involvement.

“We have less than one-quarter of students involved, and then they are quitting because their parents are like, “I’m already their teachers, now I have to be their music teachers?’,” he said. “We’re seeing almost nobody continuing.”

To his mind, it highlights an issue that was ongoing, even before the pandemic, about the relevance of funding and support for the arts. When educators talk about learning losses in the pandemic, they are usually referring to gaps in English and math — not music, he added.

But Mazzocchi recalled hearing Clarence B. Jones, a speechwriter for Martin Luther King Jr., attribute his music instruction in public school to learning about cadence and rhythm in speeches.

“Are we denying the opportunity for somebody to be the next speechwriter for the next Martin Luther King Jr.?” Mazzocchi said. “That’s what performing arts organizations need to think about — about communicating to the general population about why this is so important.”

In the meantime, some performing artists say they are mulling whether to switch careers, even as they hold out hope that theaters and other spaces could open in the fall.

“All of us start as little kids with music, and we wind up practicing and practicing, going to conservatory, and you get to this point and then everything falls out from underneath you,” said Sarah Hewitt Roth, a cellist who was playing in the revival of West Side Story when the production shut down last March. “If we can just get through these next months, hopefully we can pick up the pieces and build back.”

“There have been moments of elation like when the Save Our Stages bill got passed, but again that was two months ago and we’re still waiting,” Crothers said of the promised federal aid. “If we don’t get the help, we are probably toast.”