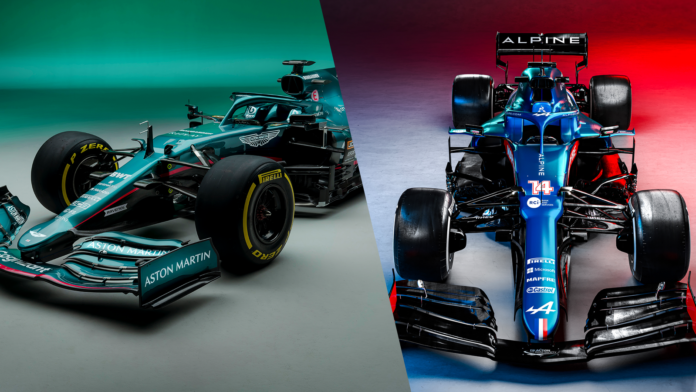 It’s been an F1 launch season like no other and it has delivered – with stunning designs from the teams, old and new; Ferrari will be 10th and last team to reveal their car on March 10; Pre-season testing begins on March 12, live on Sky Sports F1

This is the car Lewis Hamilton will look to seal an unprecedented eighth Formula 1 title in this season. Mercedes, chasing an eighth crown of their own, have retained the black base to their livery for a second year, underlining the team’s commitment to tackling global racism and discrimination. The team’s closer cooperation with AMG is also reflected on the new W12, which features much more prominent AMG branding towards the rear, while also keeping a red star near the cockpit in memory of Niki Lauda.

Interestingly, Mercedes, who always seem to find aerodynamic gains, have admitted to hiding their floor design for 2021 while they have also refused to divulge where they have spent their two development ‘tokens’ – permitted as part of the subtle regulation changes – over the winter.

Same, same… but different. Red Bull have rarely altered their livery over the years and that is the case again with their aptly-named RB16B, sporting the usual design. There is, however, plenty of intrigue about the car – which the team seem to be keeping under wraps somewhat with just two digital renders released last week despite both Max Verstappen and new signing Sergio Perez driving it at Silverstone.

Keeping their rivals on their toes? Absolutely, with most suspecting Red Bull have been working their magic towards the rear of their new challenger.

New Mercedes engine, but papaya and blue is here to stay for McLaren – whose new MCL35M is tasked with building on the team’s rising form. McLaren have ran in their recognisable and traditional papaya since 2018 and the only real noticeable difference on this design compared to last year is more blue on the nose. Lando Norris and new signing Daniel Ricciardo were both impressed at the unveiling, while McLaren are also confident about their enforced aerodynamic changes – admitting to spending their tokens on the rear of the car to incorporate the new power unit.

After a 61-year absence, this is the stunner Aston Martin are bringing back to F1 this season. The famous British carmaker unveiled the new AMR21 with a star-studded launch, which featured appearances from James Bond actor Daniel Craig (of course) and NFL superstar Tom Brady, as well as punchy statements from team personnel and winter arrival Sebastian Vettel. The car’s livery is British racing green – Aston Martin’s historic colour of choice – while also including a smattering of pink, so not completely erasing the Racing Point look of the last few years.

The 2021 F1 grid is definitely going to look great, and should be very competitive too. We’re on a roll 😎. Welcome back @AstonMartinF1 https://t.co/6hF8brndvE

Explaining Aston Martin’s new car to Sky Sports F1, Otmar Szafnauer said it would retain the low-rake philosophy of Racing Point’s of 2020 but that there would be many changes. “We will still have a lot of new parts on the car, a lot of new aerodynamic development, even a new chassis for us as well,” he said. “Although the car will be similar to last year, it’s predominantly new.”

Alpine will make their F1 debut in a sleek French-flag themed A521 this season. The blue base should go down well with returning legend Fernando Alonso – who won both his F1 titles in that colour – with Renault’s rebranded outfit starting their era with a fresh look after Renault’s yellow and black design from the last five years. Alpine, another team who have focused their winter work and development tokens on the rear of the car, are also clear that the red, white and blue design is a nod to their British links.

AlphaTauri have unveiled a new look for their second year in F1; gone is the white base from last season, with the AT02 now predominantly blue. The team, who welcome young Japanese driver Yuki Tsunoda to partner Pierre Gasly, are targeting the upper midfield in 2021 and have used tokens and 2020 Red Bull parts to overhaul the front end of their new car, particularly the nose.

This is Alfa Romeo’s third car since returning to the sport, and the changes to the livery are subtle. The red and white base remains on the C41, albeit with different combinations as Alfa – retaining Kimi Raikkonen and Antonio Giovinazzi for another season – hope to rise up the grid after a disappointing 2020. They have used their development tokens on designing a new nose and other parts around the front of their challenger.

Mick Schumacher and Nikita Mazepin will make their F1 debuts this season in this new-look Haas car. The American team have ditched white, red and grey livery of previous seasons for a new white, blue and red design, matching the colours of Russia’s flag. The new colours coincide with the announcement of a new multi-year title sponsorship deal with Russian firm Uralkali, which is part-owned by Mazepin’s father, Dmitry.

Haas, stating 2021 would be a “transitional season” as they look towards the huge 2022 rules overhaul, have opted not to spend any of their tokens over the winter, only changing the car as required by the new regulations.

Williams say they wanted to acknowledge their “incredible past” while also “looking to the future” with their new car, the first since the Williams family stepped away from the team last year. Retaining Frank Williams’ initials in the newly-launched FW43B is a nice touch, as is the blue, white and yellow design – evoking memories of those dominant title-winning cars from the 1980s and ’90s.

What is also notable is that there aren’t many sponsors on that car as yet, while Williams haven’t yet revealed what they have spent their tokens on – only admitting the FW43VB was “evolutionary on the technical side”.