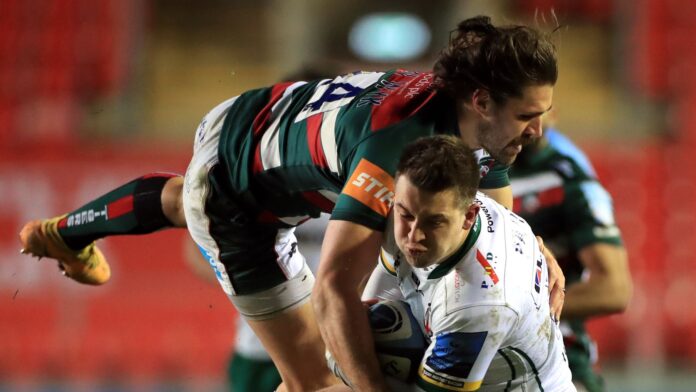 The Tigers fought back to secure a narrow 33-32 win over London Irish, while Sale made it two Premiership wins in a row as they saw off Newcastle 31-16

Leicester Tigers won a close-fought battle against 14-man London Irish, while Sale moved up to second place in the Premiership after beating Newcastle.

London Irish centre Terrence Hepetema was sent off as Leicester continued their recent improvement with a hard-fought victory.

The Tigers had rested a number of their leading players at Bristol last weekend in readiness for this fixture and they were rewarded with a morale-boosting win, though a chaotic card-strewn finish led to a deceptively close 33-32 scoreline.

Sale moved up to second in the Gallagher Premiership after defeating Newcastle 31-16 at the AJ Bell Stadium.

The Sharks controlled the opening period and deservedly moved 18-6 in front at the break thanks to tries from Marland Yarde and Lood De Jager.

AJ MacGinty converted one of those efforts and also added two first-half penalties, while Newcastle’s response came via the boot of Brett Connon.

Connon was successful for a third time off the tee in the second period but two more MacGinty three-pointers effectively sealed a thoroughly deserved win for Alex Sanderson’s men.

Joel Matavesi and Simon Hammersley traded late tries in what was an exciting finale, but it was the Sharks that left much the happier.