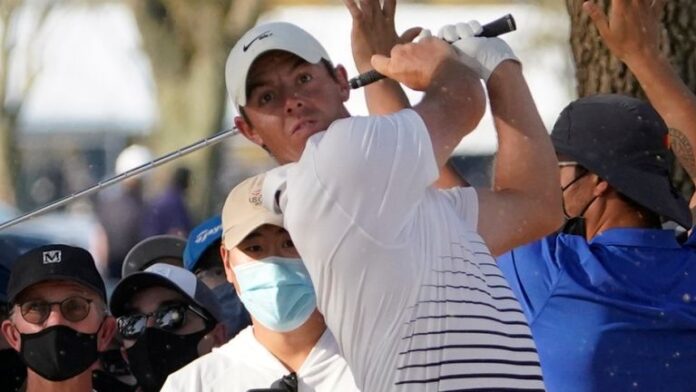 Corey Conners leads with Martin Laird in hot pursuit, while Rory McIlroy manages to stay in contention despite fighting an errant swing during the second round at Bay Hill. Watch the third round live on Sky Sports Golf.

Rory McIlroy will go into the weekend of the Arnold Palmer Invitational two shots off the lead as Martin Laird headed a strong British challenge at the halfway stage.

Ten years after being presented with the trophy by “The King” at Bay Hill, Laird is again in contention on eight under par, one behind Corey Conners, while 2018 champion McIlroy added a scratchy 71 to his opening 66 to stay in the top four along with probable Ryder Cup team-mate Viktor Hovland.

The five-pronged English contingent of Paul Casey, Justin Rose, Lee Westwood, Matt Fitzpatrick and Tommy Fleetwood are all in the top 11 after 36 holes, while defending champion Tyrrell Hatton birdied four of the last five holes to avoid an early exit.

Conners shared the overnight lead with McIlroy, and the Canadian recovered from a slow start early on Friday to claim a clear, outright lead with a birdie at 12 followed by a 25-foot putt for eagle at the 16th, a 69 setting the mark at nine under in the clubhouse.

And that was a score that stood up for the remainder of the second day, with Laird the only player to get within one after the powerful Scot carded an eagle and four birdies while dropping just one shot in a resolute 67 in the tougher, firmer afternoon conditions.

“It was getting a little baked out around the hole those last few holes, but I’m very pleased,” said the 38-year-old, who won his fourth PGA Tour title in Las Vegas last October, edging out Austin Cook and Matthew Wolff in a playoff.

“I drove the ball excellently yesterday and with the rough we got here this week you need to do that. If anything, I think I maybe even drove it a little better today. That’s kind of the important thing around here right now, getting the ball in the fairway. So I’ve been doing that for a couple of days and hopefully it can continue.”

Hovland had just let his round get away from him when, after covering the back nine in 33, he dropped shots at the second and fourth before three straight birdies got the impressive young Norwegian back into the mix, a 68 getting him to seven under and looking good to extend his sequence of top-10 finishes to five in a row.

McIlroy was out late on day two, and he suffered an early setback with a bogey at the first following a pulled drive into the trees, but he hit back with birdies at three, four and six despite fighting an errant swing, later revealing he was struggling with too much rotation of the clubface.

The result was a return of the inconsistency that has blighted his year so far, but he continued his improved form with the putter and scrambled a number of clutch pars while adding one further birdie against two more bogeys, adding up to a 71.

All eyes were on Bryson DeChambeau when he arrived on the sixth tee as he seriously contemplated going for the par-five green, but he felt the wind was not co-operating and was clearly irritated at having to make birdie in a more traditional manner.

He was even more irritated when he blocked his second and had to settle for a par and, like McIlroy, his swing deserted him mid-round and bogeys at the eighth and ninth required some damage limitation, although he did birdie 14 and 16 to climb back to six under – three behind Conners.

Casey insisted his solid three-birdie 69 “wasn’t anything super special” as he moved into a nice position on five under along with Rose, who is looking for his first top-10 finish on the PGA Tour since his ninth place at the PGA Championship in August, since when he has tumbled to 36th in the world rankings.

Rose’s 68 featured one of the shots of the day, a towering five-iron to four feet from what was thought to be an inaccessible pin on the 17th green, and he converted for birdie to edge one ahead of Westwood and Fitzpatrick, who both fired 71.

Fleetwood was one of the last to finish on Friday and defied the fading light to drill home a 15-footer to save par at the ninth and return a four-birdie 70, while up-and-coming Scot Bob MacIntyre made it safely through to the weekend on two under after back-to-back 71s.

Hatton had much work to do to prevent his defence of the title lasting only two days, and he eliminated the costly errors that contributed to his 77 on Thursday and cruised to the turn in 34 before giving a shot back at the 11th, a mistake that looked likely to send him home.

But he was not about to give up his crown without a fight, and a superb hole-out from 50 feet at the 14th prompted a run of four consecutive birdies, capped by a thrilling 42-foot putt for a two at the 17th, and a good par-save at the last rounded off a 67 that hauled him back to level par.

Patrick Reed, however, was a surprise casualty as a 74 was one too many to make the cut, while Open champions Shane Lowry, Francesco Molinari and Henrik Stenson also bowed out.