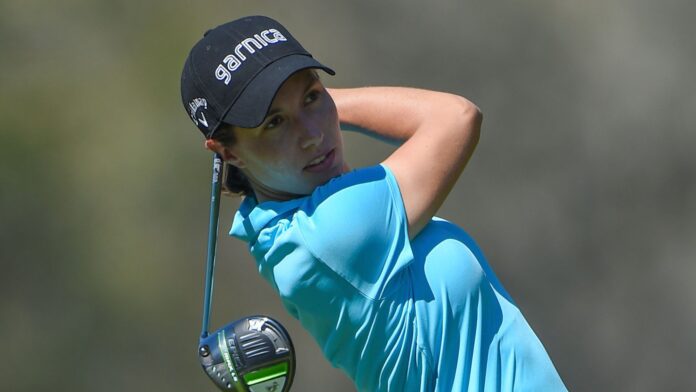 Solheim Cup star Ciganda goes low on day two and edges ahead of Nelly Korda, while veteran Dame Laura Davies fires a superb bogey-free 69 to make the cut at 57 years of age!

Carlota Ciganda fired the best round of the second day as she moved to within two shots of joint-leaders Jennifer Kupcho and Austin Ernst at the LPGA Drive On Championship.

Ciganda carded seven birdies, including five in six holes on the front nine, lifting the Spaniard to eight under as Kupcho and Ernst both returned back-to-back 67s to lead on 10 under par.

Nelly Korda slipped three off the pace after a 70, and her sister Jessica slumped to a 75 while Dame Laura Davies produced arguably the performance of the day, the 57-year-old firing a bogey-free 69 to make the cut with plenty to spare.

Ernst appeared set to have the lead to herself when she got to nine under with six holes remaining, but Kupcho reeled off four birdies in five holes, the last of which was matched by Ernst as both got into the clubhouse locked together at the top of the leaderboard.

But Ciganda was the biggest mover of day two, the Solheim Cup star finishing off an excellent day’s work with two birdies over the last three holes to edge ahead of Nelly Korda and into third.

The Spaniard revealed afterwards that she relished the opportunity to play alongside Hall of Famer Davies, with both handing in bogey-free cards in tricky conditions, with only nine of the 120-strong field breaking 70.

“I love playing with Laura,” said Ciganda of Davies, who had 15 titles to her name before Ciganda was born. “I think she’s amazing to play with. I think her talent is unbelievable, like everything she does with her different shots. She’s very creative, uses lots of imagination.

“I always enjoyed that. I think she can hit shots this no one here can hit, so I have a lot of respect for her. I think she’s just so good for golf, it’s so good for the Tour to see her playing so well, making cuts.

“I love how quick she is. She just goes, she doesn’t think, she just hits it, finds it, and then hits it again. I love how she plays, it’s just pure talent.”

Davies attributed her form to new equipment, adding: “I hit a couple of dodgy tee shots, but on the whole my irons were good. It’s all new for me at the moment because I’ve just signed with Callaway, so it’s all new clubs.

“But the guys in the trailer have set me up with what seems to be the perfect set now. So it’s down to me to play well. I can’t blame the equipment!”

Nelly Korda, winner of the Gainbridge LPGA last week, recovered from a bogey at her opening hole to keep any further mistakes off her card and making three birdies, while Ireland’s Leona Maguire is just six off the pace at the halfway stage after rounds of 69 and 71.

Bronte Law heads the English challenge on one under with Davies, Mel Reid and Charley Hull on level par, while Georgia Hall has 12 strokes to make up on the leaders.