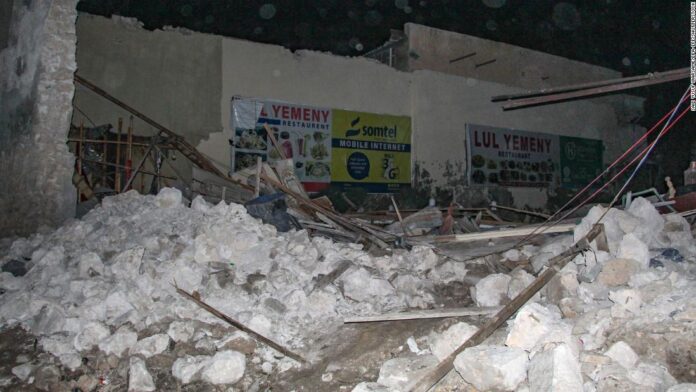 A car packed with explosives was detonated at the gates of Luul Yemeni restaurant near the port at around 8 p.m. local time (12 p.m. ET), Captain Aden Osman, a senior police officer in the capital, confirmed to CNN.
The explosion was followed by heavy gunfire.
The powerful blast caused widespread destruction of several buildings and business centers in the area, Osman added. Aamin Ambulance services confirmed 30 people have been wounded in the bombing and were rushed to local hospitals.
“Plumes of white smoke covered the city after the enormous explosion followed by gunfire,” said witness Liban Yusuf, adding that a building near the site collapsed and a rescue operation was underway to evacuate people trapped in the rubble.
The terror group Al-Shabaab has claimed responsibility for the attack through a statement posted on its affiliated sites.
It is the second attack on the same restaurant since August 2020. The latest blast comes amid tight security measures in Mogadishu during a political crisis over a delayed election. The country’s president Mohamed Abdullahi Farmajo’s mandate expired on February 8, with no timely elections held.
Last month, another car bomb was detonated near the Somalian presidential palace.
Al-Shabaab was pushed out of the Somali capital in 2011 by Somali and African Union forces, but the Islamist group have been carrying out car bombings and gun attacks in the coastal city.

Cuba’s Raul Castro steps down, ending the era of his famous clan at the country’s helm