Home Sport Ernst one ahead of Kupcho in Florida 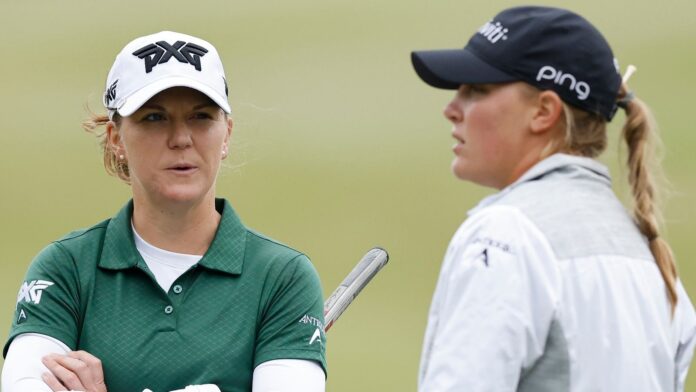 Austin Ernst chasing her third LPGA Tour title, with Jennifer Kupcho searching for her maiden victory as a professional; Watch the final round live on Sunday from 7.30pm on the Sky Sports Golf YouTube channel

Austin Ernst faces a final-round shootout with Jennifer Kupcho after the pair pulled themselves clear of the field at the LPGA Drive On Championship.

Ernst posted a third-round 69 at Golden Ocala Golf Club to get to 13 under and one ahead of Kupcho, who was three behind until signing off a two-under 70 with a final-hole eagle.

Switzerland’s Albane Valenzuela is three off the lead in tied-third alongside Patty Tavatanakit and Jenny Coleman, while Spain’s Carlota Ciganda dropped into a share of sixth with Danielle Kang after a three-over 75.

Ciganda had gone into the weekend two back but slipped out of contention after four bogeys and a double-bogey in her third round, with the Spaniard eight off the pace despite a closing eagle.

Ernst, playing alongside Kupcho, birdied three of her opening nine holes and bounced back from a bogey at the 10th to pick up a shot at the next, before closing her round with seven straight pars.

“I didn’t quite have it ball striking-wise today,” Ernst said. “I hit a few good shots but then kind of sprayed a few drives and kind of had to work a little bit harder that I have had to work the last couple days.”

Kupcho had recovered from an early bogey at the second to post back-to-back gains from the seventh, with the 23-year-old then responding to another dropped shot at the 13th to roll in a 12-foot eagle at the par-five last.

Ireland’s Leona Maguire is tied-11th on three under alongside the Korda sisters, winners of the first two events of the 2021 season, while Mel Reid is a further shot back with Charley Hull.

Laura Davies, who rebounded from an opening 75 with a 69 on Friday to advance to the weekend, dropped five shots in a five-hole stretch around the turn and struggled to a four-over 76.

Watch the final round of the LPGA Drive On Championship live on Sunday from 7.30pm via the red button on Sky Sports Golf and for free via the Sky Sports Golf YouTube channel!