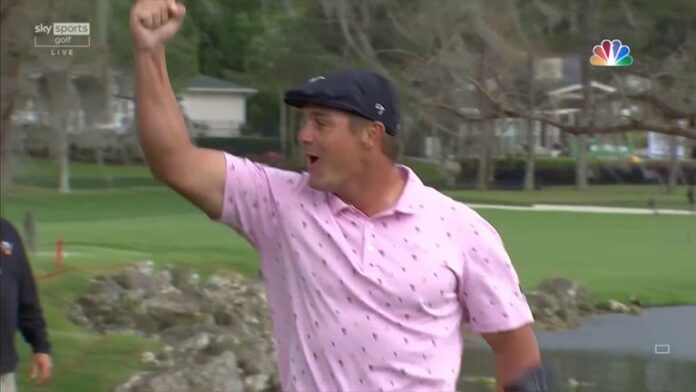 Lee Westwood takes a one-shot lead into the final round of the Arnold Palmer Invitational, with Bryson DeChambeau and Jordan Spieth in the chasing pack.

Westwood carded a seven-under 65 on a low-scoring day at Bay Hill to move to 11 under and top of a star-studded leaderboard, bolstering his hopes of claiming a first PGA Tour title since 2010.

The 47-year-old’s closest challenge comes from overnight leader Corey Conners and DeChambeau, who sent social media into a frenzy with his aggressive tee shot at the par-five sixth, while Spieth sits tied-fourth alongside Keegan Bradley after firing a hole-in-one on his way to a third-round 68.

Tommy Fleetwood is in sixth spot and Rory McIlroy slipped four behind after a level-par 72, while defending champion Tyrrell Hatton jumped within five of the lead thanks to a six-under 66.

Heading into the weekend five shots back, Westwood drained a 30-footer at the first and bounced back from missing a six-footer at the next by making four birdies in a five-hole stretch from the fourth.

Westwood rolled in from 18 feet at the 10th and cancelled out a three-putt bogey at the 11th by birdieing the 13th, with the Englishman responding to another dropped shot at the 14th by making a 30-foot eagle at the par-five next to move into a share of the lead.

The former world No 1 then nailed another long-range putt at the last to set the clubhouse target, while Conners – playing in the final group – got up and down to avoid dropping a shot at the 18th and stay within one of the lead.

DeChambeau birdied two of his first four holes and added another par-five sixth after a monster 370-yard drive over water, with the US Open champion then picking up a shot from six feet at the seventh but bogeying the eighth to reach the turn in 33.

A tap-in birdie at the 12th briefly moved DeChambeau into top spot, with the 27-year-old then recovering from a missed six-footer at the 14th to post a two-putt gain at the par-five next and get back to 10 under.

Bradley carded a round-of-the-day 64 to get within two of the lead alongside Spieth, who followed a 20-foot birdie at the first with an incredible ace at the par-three next before converting from 30 feet to save par at the third after finding water off the tee.

The three-time major champion holed out from the bunker at the seventh and followed a 35-foot birdie at the 10th with a two-putt gain at the 12th to go six under for his round, only to fall back with a three-putt blemish at the 14th and another bogey at the 17th.

McIlroy was alongside Fleetwood on eight under until a final-hole bogey, where he failed to convert from five feet, while Hatton made an eagle and three birdies on his back nine to move to tied-11th.

Matt Fitzpatrick and Paul Casey both sit in the group six back and in tied-18th, while fellow Englishman Justin Rose withdrew mid-round because of a back injury.

Who will win the Arnold Palmer Invitational? Live coverage begins on Sunday with Featured Groups from 1pm on Sky Sports Golf, ahead of full coverage from 5.30pm.

Taylor Swift is back at No. 1 for the third time...

Lizzo has heard from Chris Evans about her drunken DMs

How ‘Sound of Metal’ used recordings of Riz Ahmed’s body

Tig Notaro finds a way to laugh through the pain