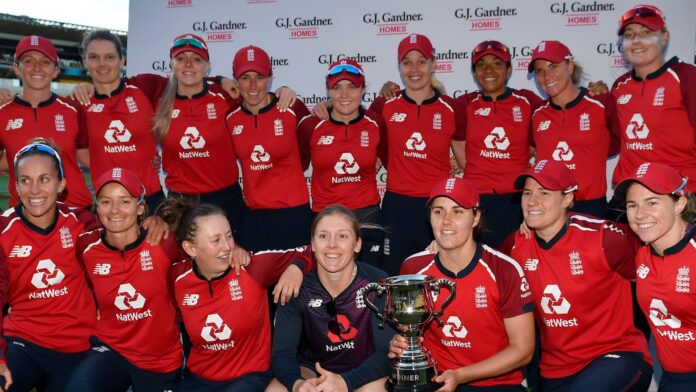 Nat Sciver stepped in as captain for the injured Heather Knight as England Women completed a 3-0 T20 series sweep over New Zealand with their 11th consecutive win in the format.

Sciver, leading England for the first time with Knight nursing a minor hamstring complaint, took the match-winning wicket as her side skittled New Zealand for 96 to win by 32 runs as the hosts chased 129 for a consolation victory at Wellington’s Sky Stadium.

England found things tricky with the bat – Fran Wilson (31 from 23 balls), who was playing her first game of the series, and Sophia Dunkley (26 off 29) the top-scorers – but they were clinical with the ball.

Off-spinner Mady Villiers picked up 3-10, while left-arm spinner Sophie Ecclestone (2-19) and seamer Katherine Brunt (2-19) also impressed as the hosts were dismissed in 18 overs.

Brunt – back in the side after missing the second game of the series with a head cold – reduced New Zealand to 1-2 in the first over of the chase after banishing Sophie Devine and Hayley Jensen for ducks.

Amy Satterthwaite (25) and Amelia Kerr (18) – both of whom went on to be stumped by England wicketkeeper Amy Jones – steadied the innings slightly, taking the White Ferns to 37-2, only for the hosts to then lose seven wickets for 26 runs to tumble to 63-9.

Villiers dismissed Katey Martin (3) in the 10th over and then went on to remove Kate Ebrahim and Leigh Kasperek for ducks from successive balls in the 12th.

Maddy Green (20) and Rosemary Mair (13no) extended the New Zealand innings with a 10th-wicket stand of 33 but a convincing England win was sealed when Sciver had Green caught by Ecclestone.

England had won the preceding ODI series 2-1 but were denied a clean sweep when a century from Satterthwaite steered New Zealand to victory in the final game.

The tourists managed to wrap up a 3-0 win in the T20s, though, even if that seemed in some jeopardy halfway through Sunday’s game with only Wilson, Dunkley, Jones (15) and Tammy Beaumont (14) reaching double figures.

England slipped to 34-3 and 84-6 as they lost wickets at regular intervals on a spinning pitch after being inserted by New Zealand, for whom captain Devine took 3-30 from her four overs.

Sciver’s side were 88-6 with five overs to go – Sciver having earlier been run out for nine – but they managed a further 40 runs from the final five overs, with Wilson, Ecclestone (9) and Sarah Glenn (7) hitting boundaries.

England subsequently reached a total way beyond New Zealand’s grasp, with each member of the tourists’ bowling attack going on to pick up a wicket – Sciver (1-20), Glenn (1-21) and Freya Davies (1-7) supporting Brunt, Ecclestone and Villiers.