Home Sport AJ ramps up training – ‘He’ll do a job on Fury!’ 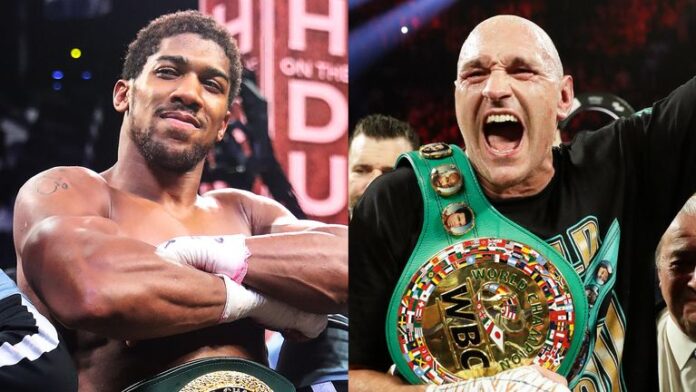 Eddie Hearn on Anthony Joshua: “Although he’d tell you that he’s training just to improve as a fighter, I know that all he’s thinking about is Tyson Fury. He’s working on the plan to beat this guy and become undisputed.”

Anthony Joshua has the same winning mind-set as Saul ‘Canelo’ Alvarez as he prepares to take on Tyson Fury, says his promoter Eddie Hearn.

Negotiations for one of “the biggest fights of all time”, Joshua and Fury’s undisputed heavyweight title clash, are ongoing with both sides optimistic of a resolution.

IBF, WBA and WBO champion Joshua is approaching the fight in a similar way to Canelo, the pound-for-pound phenom from Mexico, according to Hearn.

“I see similarities, not in the ring, between him and Canelo,” Hearn told Sky Sports.

“Two guys who came from nothing, who have built their legacies, who have the same hunger now as when they first walked into a gym.

“That’s what makes a winner.

“Joshua is constantly trying to evolve.

“When you walk into Canelo’s dressing room after a fight he is talking to [his trainer] Eddy Reynoso about how he can improve.”

After a shock loss to Andy Ruiz Jr midway through 2019, Joshua revamped his pool of sparring partners, backed head trainer Rob McCracken, brought in Joby Clayton and Angel Fernandez as extra coaches then produced a skilled and disciplined performance to win a rematch.

Joshua is now developing himself for the specific task of ending Fury’s undefeated record.

“Completely,” agreed Hearn. “He would say that he’s tailoring his training for his career.

“He is training, sleeping, resting. I want to rein him in for a rest.

“He is so focused. Although he’d tell you that he’s training just to improve as a fighter, I know that all he’s thinking about is Fury.

“He’s working on the plan to beat this guy and become undisputed.

“I love the work he’s doing, the improvements he’s making, the mind-set.

“He has the mind-set of a winner, of a champion.

“Fury is a fantastic fighter but AJ will do a job on him.

“The preparation starts now. Don’t think Fury isn’t doing the same. He knows. This may be the biggest fight of all time.”

How close is Joshua vs Fury?

One of the major hurdles, Oleksandr Usyk’s status as WBO mandatory challenger to Joshua’s belt, is being resolved.

Usyk is set to face Joe Joyce for the WBO interim title.

Sky Sports reported in January that Usyk’s promoter Alexander Krassyuk had “received the letter from the WBO saying that they are considering granting sanction for AJ vs Fury.”

Deontay Wilder’s demand for a third WBC title fight with Fury is also being resolved.

“We’ve been assured by them, that’s not going to be an issue in making this fight [Joshua vs Fury],” Hearn previously told Sky Sports.

Hearn has said: “We are finalising the finest details of the contract and hope to make an announcement soon.”