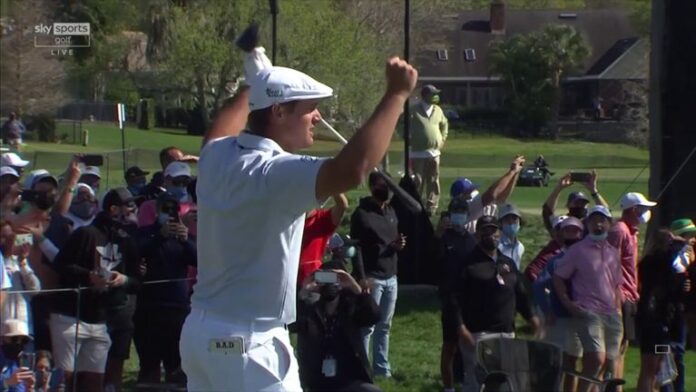 Bryson DeChambeau moves top of the FedExCup standings after registering his second victory of the season at Bay Hill; Playing partner Lee Westwood falls just short in his bid for a first PGA Tour victory since 2010

Bryson DeChambeau came through a thrilling final-round tussle with Lee Westwood to secure a one-stroke victory at the Arnold Palmer Invitational.

The US Open champion posted a one-under 71 on a gripping Sunday at Bay Hill to end the week on 11 under and register a second win of the PGA Tour season, moving him top of the FedExCup standings.

DeChambeau finished a shot clear of overnight leader Westwood, who mixed two birdies with three bogeys in a closing 73, with Canada’s Corey Conners a further two strokes back in third after a two-over 74.

Jordan Spieth bogeyed three of his last four holes to finish tied-fourth alongside Andrew Putnam and Richy Werenski, while Tyrrell Hatton carded a five-over 77 to end his title defence in a share of 21st.

DeChambeau narrowly avoided going out of bounds off the first tee on his way to an opening-hole bogey and holed a nine-footer to save par at the third, where Westwood failed to convert from a similar distance and dropped a shot after a wild drive.

A 35-foot birdie at the fourth moved DeChambeau into a share of the lead and Westwood squandered an opportunity to pick up a shot from inside ten feet at the next, before both players birdied the par-five sixth in completely different ways.

DeChambeau smashed a 377-yard drive over the water into a fairway bunker and recovered form missing the green with his second to chip to four feet, while Westwood got up and down from much further back to make a birdie of his own.

The Englishman dropped a shot at the seventh to reach the turn one back and holed from seven feet at the tenth to avoid falling further behind, while DeChambeau drained a 50-footer to save par at the next after nearly finding water off the tee and sending his approach into the sand.

Westwood holed a 30-foot birdie at the 12th and responded to a three-putt bogey from the edge of the 14th green by making a 20-footer to scramble a par at the next, but then failed to convert a six-foot birdie opportunity at the par-five 16th.

DeChambeau salvaged par at the 16th after being plugged in a bunker and forced to lay up, keeping him one ahead, before holing from six feet to save par at the last to complete an eighth PGA Tour victory.