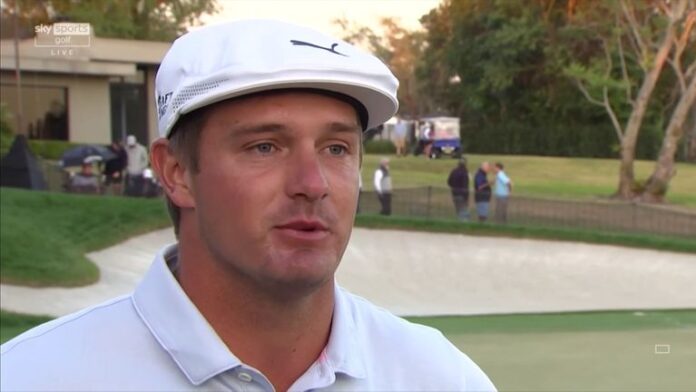 Tiger Woods helped Bryson DeChambeau with text messages ahead of final round at Bay Hill; US Open champion praises Lee Westwood after pipping Englishman by one shot; Westwood: We had a really good battle

Bryson DeChambeau revealed he had been helped by text messages from Tiger Woods as he clinched a one-shot victory over Lee Westwood at the Arnold Palmer Invitational.

The 27-year-old American went head to head with 47-year-old Englishman Westwood at Bay Hill and secured his eighth PGA Tour win thanks to a one-under 71 as his rival carded a 73.

The US Open champion held his nerve to hole a five-foot putt for par at the 18th after Westwood had applied the pressure with a par of his own.

“I got to thank personally Tiger Woods, he helped me out quite a bit today this morning, talking to him from texts,” said DeChambeau.

Woods is recovering from his injuries after his recent car crash and DeChambeau also drew inspiration from the eight-time Bay Hill champion in the closing stages.

He added: “You know one of the things that stuck in my mind was Tiger and how he kept fighting. A lot of the conditions were similar to the US Open and that helped me. That helped me feel comfortable out there and I knew there was going to be tough conditions out there.”

DeChambeau finished second in the tournament to Rory McIlroy in 2018 and was honoured to finally get his hands on the trophy.

“It’s beyond my wildest dreams for Mr Palmer’s event,” he said. “Came here as an amateur, he gave me an invitation and I loved this golf course the minute I arrived and I love the atmosphere and I love the fans, I loved what Mr Palmer did with this place and what he’s done and his legacy he’s left here. It’s quite amazing.”

DeChambeau also paid tribute to runner-up Westwood, adding: “It was a lot of fun and I was definitely playing a little bold. But my hat’s off to Lee, he battled all day out there and it was an amazing battle, loved every minute of it.”

Westwood also admitted he had enjoyed locking horns with DeChambeau and was impressed by his power.

“I thought we had a really good battle,” he said. “It was never really more than one in it all day and they were tough conditions out there. It wasn’t going to be a day where anybody was going to shoot 68 or 67, it was a day for playing sensible and hanging on and grinding out the pars.

“Bryson has worked hard in the gym and he’s worked on his technique to hit it a long way and it’s not easy to hit it that straight as he hits it as far as he hits it. So people are going to have advantages and his is obviously length. He can overpower a golf course. So it’s fun to watch, I think.”