Home Culture Meghan tells Oprah she contemplated suicide and claims there were ‘concerns’ about... 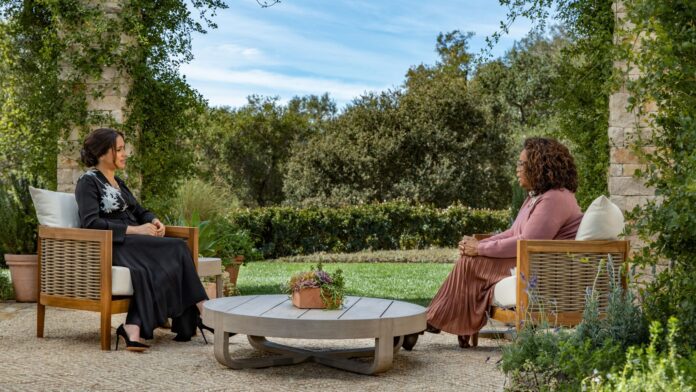 Meghan and Harry’s tell-all interview with Oprah has aired in the US, with the Duchess of Sussex claiming there were “concerns” about baby Archie’s skin colour before he was born and saying she had suicidal thoughts during her time in the Royal Family.

American audiences were the first to see the two-hour Oprah With Meghan And Harry: A Primetime Special, in which the couple made a series of bombshell claims – including Harry saying Prince Charles had at one point stopped taking his calls, and alleging he was “trapped, but didn’t know I was trapped” in the royal system, “like the rest of my family”.

The couple also discussed racism, with Harry saying it “hurt” that his family did not speak out against articles “with colonial undertones” written about his wife.

Meghan told Oprah she married into the royals “naively, because I didn’t grow up knowing much about the Royal Family”.

Key points from the bombshell interview

• Meghan revealed she had suicidal thoughts and said: “I just didn’t want to be alive any more”
• The couple alleged a member of the Royal Family raised “concerns” about Archie’s skin colour before he was born
• Harry said Prince Charles stopped taking his calls when the couple left the UK
• He denied that he had “blindsided” the Queen with the news the couple were stepping down as senior royals
• The duke said he had been “trapped” in the royal system – “like the rest of my family”
• Meghan denied reports she made Kate made her cry ahead of her wedding – claiming “the reverse happened”
• The couple revealed they are expecting a little girl – and that they were married three days before their big ceremony

Speaking about her pregnancy with baby Archie, Meghan claimed the Royal Family did not want him to be a prince or offer him security.

Asked why, she said there were “concerns and conversations about how dark his skin might be when he’s born”.

Winfrey asked if her son being “too brown” would be a problem, to which Meghan replied: “If that is the assumption you are making, that is a pretty safe one”.

However, she declined to say who raised the concerns, saying that would be “very damaging to them”.

She added: “That was relayed to me from Harry, those were conversations the family had with him, and I think it was really hard to be able to see those as compartmentalised conversations.”

Meghan also told Winfrey she struggled with her mental health at the height of her crisis in the Royal Family, and that she had suicidal thoughts. “I just didn’t want to be alive any more,” she said.

The duchess was also asked about headlines written about her and the Duchess of Cambridge, including one story alleging Meghan made Kate cry.

“The reverse happened,” Meghan told Oprah, later clarifying that Kate had “really hurt my feelings” a few days before the wedding, but that she had apologised.

It was not a “confrontation” and it would not be “fair” to Kate to go into detail, she said, but added that it was “hard to get over” being blamed for something she did not do.

“Everyone in the institution knew that wasn’t true,” she continued, and she hoped Kate “would have wanted that to be corrected”, but added that “she is a good person”.

Asked if she thinks there was a separate standard for her and Kate, and if so why, Meghan said: “I don’t know why. I can see now what layers were at play there.

“And again they really seemed to want a narrative of a hero and a villain.”

Meghan, who is pregnant with her second child, spoke to Winfrey on her own at the beginning of the chat, with Harry joining for the second half – with the couple revealing together that they are having a girl.

Asked by Winfrey why they chose to step down from their roles as senior royals, Harry said: “Lack of support. And lack of understanding.”

Harry denied that he “blindsided” the Queen with the news, saying he has “too much respect” for his grandmother, and said they have a good relationship.

However, he said that his father, Prince Charles, had “stopped taking my calls” at one point.

Asked about the “tipping point” which led to the couple leaving the UK, Harry said he was “desperate”.

He continued: “I went to all the places which I thought I should go to, to ask for help – we both did, separately and together.”

Winfrey asked: “You left because you were asking for help, and didn’t get it?”

The programme started with clips from the couple’s wedding, which the Duchess of Sussex described as an “out-of-body experience” – and revealed that the couple were married by the Archbishop of Canterbury three days before the formal ceremony.

Both said that Meghan was welcomed into the family initially, but things changed later on.

Harry told Winfrey he feels “really let down” by the Prince of Wales “because he’s been through something similar, he knows what pain feels like, [and] Archie’s his grandson.

“But at the same time – I will always love him – but there’s a lot of hurt that’s happened and I will continue to make it one of my priorities to try and heal that relationship.

“But they only know what they know, or what they’re told.”

Asked whether he would have stepped down from his role if not for Meghan, Harry said “no”.

Winfrey pushed Harry to explain, to which he replied: “Trapped within the system, like the rest of my family are.

“My father and my brother, they are trapped. They don’t get to leave.

He said he has “huge compassion for that”. Asked by Winfrey what his mother, Diana, would say if she was alive, Harry said: “I think she would feel very angry with how this has panned out, and very sad.”

Speaking about his relationship with his brother, William, Harry said that at the moment it is “space”.