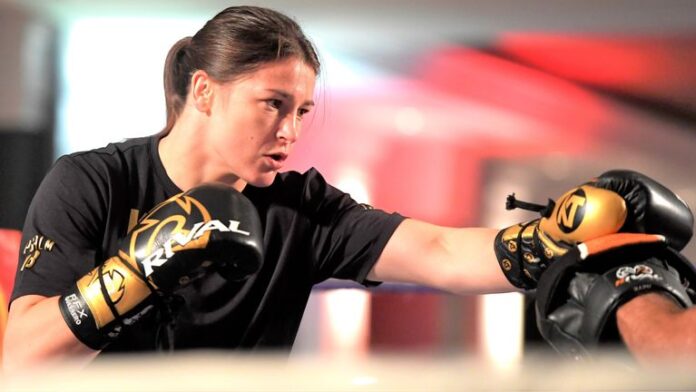 “Claressa told me to make the biggest and best fights. A fight with Katie Taylor is definitely a possibility,” Claressa Shields’ promoter Dmitriy Salita welcomes a super fight between undisputed champions

Claressa Shields versus Katie Taylor in a battle of undisputed world champions is ‘definitely a possibility’, says the American star’s promoter Dmitriy Salita.

Shields became the first undisputed champion of two weight divisions at the weekend after sealing a shutout points victory over Marie-Eve Dicaire to claim all the world super-welterweight titles.

The unbeaten 25-year-old now wants another historic challenge which could lead to an epic showdown with Taylor, the undisputed lightweight champion, who has fought two divisions below Shields at 140lbs.

“From the beginning of her career Claressa told me to make the biggest and best fights,” Salita told Sky Sports. “She means what she says and says what she means.

“A fight with Katie Taylor is definitely a possibility. Katie is a very good fighter for whom I have a lot of respect for inside and outside the ring.

“The ball is in her court if she wants to do it. It would be another mega event for women’s boxing.”

Shields, who has suggested she will face Taylor at 147lbs, could attempt to dominate a new weight class after she also collected every belt at middleweight.

“Claressa Shields is a trailblazer, a pioneer as an athlete and a social influencer who uses her gift to advance justice and equality for women around the world a la Billie Jean King, Shirley Chisholm and other incredible super women leaders throughout history,” said Salita.

“There was no better moment for her to accomplish another first of being a two-division undisputed world champion than on the weekend of International Women’s Day.

“Claressa took the bull by the horns and we did what had to be done to progress the career of Claressa, who I believe is a generational athlete who is not only excellent in the ring but crosses deep into mainstream significance.”

Good morning from the 2x Undisputed champ! The one and only Claressa “The GWOAT” Shields

Shields has questioned whether Taylor can handle aggressive opponents and believes she is a superior fighter.

“I like the way she fights,” Shields told Sky Sports last year. “I’ve been a fan of her since I was younger, coming up.

“I think Katie is like a blessing and a curse for her too, how good she is, but she has one problem. She has a problem with pressure fighters.

“All her team has to do is acknowledge that, and if she fixes that, then me and her can be in competition about who is pound-for-pound, but right now I’m pound-for-pound best and Katie Taylor is second.”